Including a rare performance of "Through My Sails" and three tracks off Silver & Gold, which just celebrated its 20th anniversary 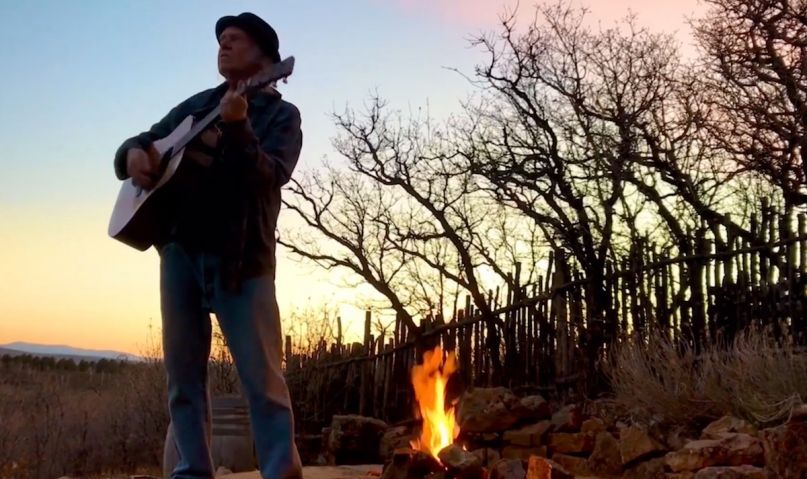 Neil Young is back with another charming installment of his Fireside Session performance series. Much like the first, second, and third entries, the acoustic set was filmed by wife and actress Daryl Hannah at their Colorado home. Over the course of 37 minutes, Young knocks out live rarity after live rarity, giving special attention to tracks off his Silver & Gold album, which just celebrated its 20th anniversary last month.

The fourth Fireside Session starts with Young outdoors by a fire (naturally), where he plays Harvest Moon selection “One of These Days” as the sun beautifully sets behind him. The folk legend also spends some time strumming inside by his fireplace and cozied up to his piano, performing songs like 1970’s “After the Gold Rush” and Ragged Glory cut “Mother Earth”. At one point, Young delivers “Through My Sails”, marking the first time the 1975 Zuma track has ever been officially done live, as Rolling Stone notes.

A solid chunk of the set is dedicated to the 2000-released Silver & Gold. Young unfurls “Good to See You”, a song he hasn’t played since 1999, as well as “Daddy Went Walking”, which last appeared on a setlist back in 2009. The 74-year-old songwriter also slips in an outdoor rendition of “Distant Camera”.

Things eventually wind down with “Are You Ready for the Country?”, from his 1972 album Harvest. While Young’s never spoken explicitly about the song’s meaning, it’s hard not to see it as an apt closer given the present-day circumstances. As a nice bonus, this last performance is mixed with footage of his two dogs happily enjoying themselves at a picturesque pond outside. If the third Fireside Session taught Young anything, it’s that the people need to see more of these pups.

Watch the full fourth Fireside Session over on the Neil Young Archives website.