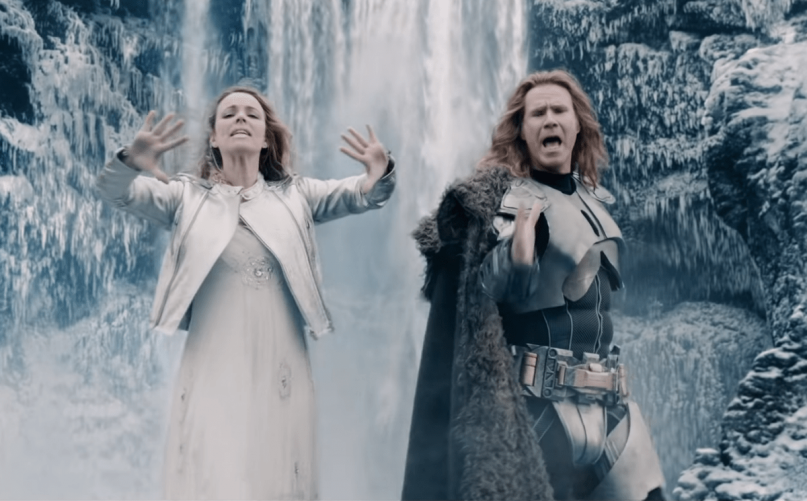 The real Eurovision may be cancelled, but this summer Netflix is releasing Eurovision Song Contest: The Story of Fire Saga. The new comedy is out June 26th, and instead of a traditional trailer, the streaming giant has shared “Volcano Man”, a bonkers music video performed by Rachel McAdams and Will Ferrell.

In the grand Eurovision tradition, “Volcano Man” is both catchy and utterly nonsensical. It’s nothing more or less than a soaring synth pop ode to a man who lives on a volcano. “Volcano man!” Ferrell roars, as McAdams replies, “He’s got my melting heart!”  The video is set on an idyllic Scandinavian fjord, and features viking attire, over-the-top makeup, and lots of Ferrell’s heavy breathing. Check out “Volcano Man” below.

Via Rolling Stone, Ferrell and McAdams star as aspiring musicians who get the chance of a lifetime. Eurovision Song Contest: The Story of Fire Saga is directed by David Dobkin (Wedding Crashers) and features performances from Demi Lovato, Pierce Brosnan, and Dan Stevens. The original soundtrack, like the movie, arrives on June 26th.

Earlier this year Will Ferrell co-starred with Juila Louis-Dreyfus in Downhill. Soon he’ll reunite with his Anchorman buddy Paul Rudd for Michael Showalter’s The Shrink Next Door. In March, he participated in James Corden’s primetime livestream Homefest.