The Complicated Queerness in Buffy the Vampire Slayer 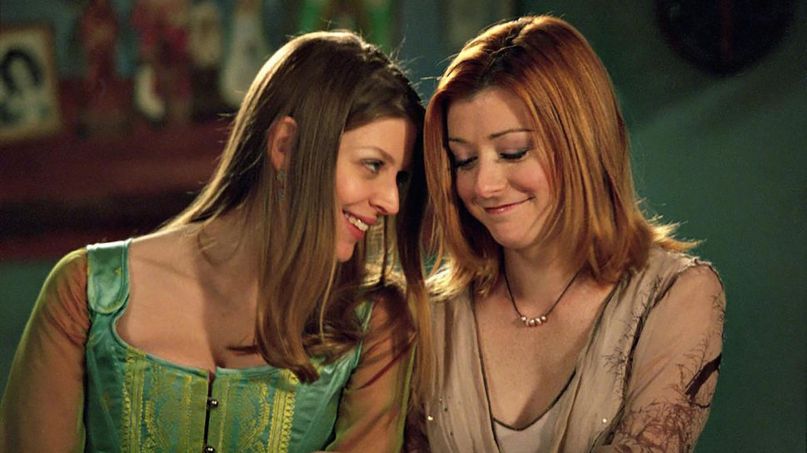 Twenty years ago, on Season Four of Buffy the Vampire Slayer, we saw the show reach a progressive milestone with Willow (Alyson Hannigan) coming out as queer. Leading up to the episode “New Moon Rising”, where she officially comes out of the closet, Willow slowly develops feelings for Tara (Amber Benson), a lesbian who’s a Wiccan and a fellow college student after first holding hands with her to conjure a telekinetic spell and fight off the evil Gentlemen in “Hush”.

During the scene in question in “New Moon Rising”, Willow talks to Buffy (Sarah Michelle Gellar) about her uneasiness over the sudden return of her ex-boyfriend Oz (Seth Green), saying: “It’s complicated … because of Tara.” After Buffy asks, “You mean Tara has a crush on Oz?,” the slayer eventually lets out a big “Oh!” as she finds out about Willow’s newfound crush. Although Buffy shows initial shock over this revelation, she tells Willow, “I’m glad you told me,” letting her know she still accepts her. Words like “I’m a lesbian” or “I’m coming out” are never used during that pivotal moment, yet thanks to expert writing and performances by both Gellar and Hannigan, those words aren’t needed.

Willow’s coming out was a step forward for a show that initially portrayed queerness as an allegory. Particularly, when Buffy “came out” as a Slayer to her mother at the end of Season Two. Despite Buffy being heterosexual, her struggle to conceal her powers and double life mirrors the debacle that LGBTQ+ youths feel about hiding their true selves and how lonely they feel being trapped in the closet. Buffy’s mother hastily kicking her out of her house is further proof of why certain queer teens are afraid to out themselves to their own families.

Eventually, the series went from showcasing a queer metaphor to romantic undertones once Buffy’s id-driven foil Faith (Eliza Dushku) entered the fray in the following season. Series creator Joss Whedon had vehemently denied that there was any subtext between Buffy and Faith, but in a 2009 interview with NPR, Whedon said that an online fan interaction caused him to recognize that there was a possibly deeper connection. Even if Faith was intended to represent the darker half of Buffy, exuding the violent impulses that Buffy has kept hidden, instances like Faith kissing Buffy on the forehead and drawing a heart for her on a window were implications of the subtext between them.

Because Buffy is the show’s main character, and the idea of a central queer protagonist likely seemed risky at the time, it was Willow, a supporting character, who got to live openly. Yet once Buffy and the Scoobies accept Willow for who she is, her sexuality is never discussed or used as a plot point. Instead, Willow evolves into a badass witch who happens to be queer with a loving girlfriend, epitomizing how same-sex relationships should look on screen in 2000, particularly given the dreaded censorship. This is why Riley and Buffy can get physical in almost every episode of Season 4, while Willow and Tara were forced to reveal their affections through magic and spells. Showing a simple same-sex kiss was unsurprisingly viewed as sketchy.

Thankfully, Whedon and co. were able to work their way around the censors and allow Willow and Tara to live out and proudly. Once their relationship started blossoming, Tara was able to get her own showcase episode in Season Five. In “Family”, Tara celebrates her birthday with her narrow-minded relatives making a surprise visit. Upon re-entering her life, they begin to criticize her use of magic in the same manner as bigoted parents telling their queer children to remain closeted. Ultimately, their neglect is what forces Tara to choose the Scooby Gang as her true family. And in hindsight, their denial of Tara’s true nature and threat to abandon her if she doesn’t choose them is the kind of neglect that Buffy probably would’ve dealt with had her mother not welcome her back into their home after previously kicking her out.

After that pivotal episode is when Buffy the Vampire Slayer continued setting a standard for queer representation. That was, until the end of Season Six when Tara suffered a tragic demise. As a devoted fan of the series, Tara’s death still has me chagrined due to its perpetuation of the “Bury Your Gays” trope, which forces queer characters to either die or meet some kind of unhappy end . Tara’s death was a jaw-dropper that still mainly served as the catalyst for Willow to go villainous in the season finale. Even as Willow calls Osiris, the God of the Dead to revive her, Osiris conveniently explains why he can’t, namely due to plot armor protecting Willow’s tragic arc. Given how the Willow-Tara couple was the first long-running lesbian relationship on a network television series, Tara’s demise unsurprisingly led to angry protests from fans after it took place.

The decision to kill off Tara was one that even showrunner Marti Noxon has come to regret. In a 2018 interview with Vulture, Noxon admitted that Tara’s death was one of the various parts of Season 6 that went too far: “In retrospect, of all the people, did she have to die?” And although there was an opportunity to resurrect Tara in an episode of Season 7, those plans came to a halt when Benson became unavailable. Later on, Benson was asked to play the First Evil disguised as Tara in “Conversations With Dead People”, but declined the opportunity to prevent fans from seeing her in an antagonist manner.

Despite that bleak period, it’s still evident why Buffy the Vampire Slayer strikes a chord with queer audiences. It does so by letting its characters live openly while tapping into the troubles of being closeted and the stand-in families for those whose blood relatives refuse to accept them. When Willow officially came out, it became a touchstone moment for the series, and for television going forward.

Admittedly, progress has been slow due to more shows co-opting the “Bury Your Gays” trope. However, audiences are far more hip to the cliche — and they’ve been quite vocal. For instance, fans of The 100 criticized the death of Lexa, a recurring lesbian character, to the point where showrunner Jason Rothenberg actually issued an apology soon after. Since then, The CW has shown signs of positive queer representation. In the Arrowverse, Nia Nal became the first trans superhero on television when introduced in Season 4 of Supergirl, while the openly lesbian Batwoman similarly received the small screen treatment.

It goes without saying that representation matters. The often marginalized LGBTQ+ people deserve to see themselves as superheroes and people who save the world. Yet, at a time where such people were often marginalized, Buffy the Vampire Slayer turned a spotlight on the queer experience in an emotionally resonant, albeit tenuous, manner.