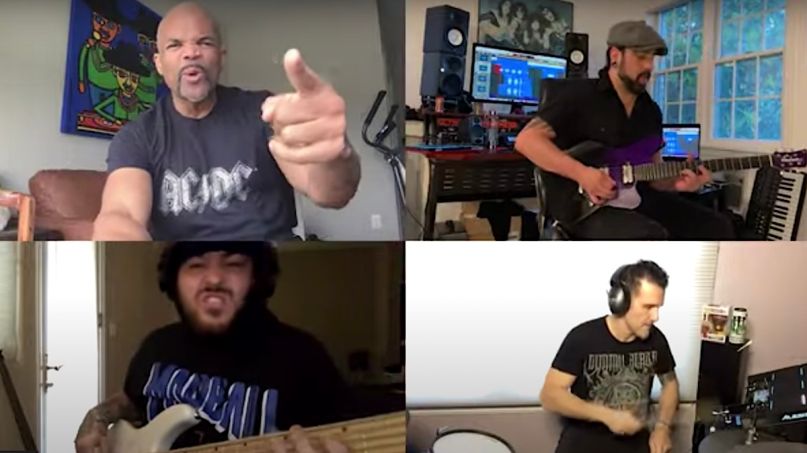 Anthrax drummer Charlie Benante has arranged a number of socially distant performances during the pandemic. For this one, he was joined by his former Anthrax bandmate and current Volbeat guitarist Rob Caggiano and Suicidal Tendencies bassist Ra Diaz, as they back McDaniels on a medley of Run-DMC classics.

“I always wanted to do a medley of Run-DMC songs, so back in March I decided to put an arrangement together and asked these amazing people to be a part of it,” explained Benante in the YouTube description. “How can you do a Run-DMC medley without the King of Rock — Darryl McDaniels DMC.”

The drummer added, “I have been a Run-DMC fan from back when I first heard ‘It’s Like That/Sucker MCs’ — they had my attention immediately! It’s no secret that [Anthrax’s] ‘I’m the Man’ song was inspired by Run-DMC and the Beastie Boys… that’s how much we loved them.”

The medley performance can be seen in the YouTube clip below, but it is also available for $1.99 via Bandcamp, with proceeds benefitting the charity organization Music Unites.

Benante has also been busy writing new music with Anthrax, but recently mentioned he would like to see a vaccine for COVID-19 before the thrash veterans release a new album. DMC, meanwhile, appears on a new remix of the Fever 333 song “Animal”.