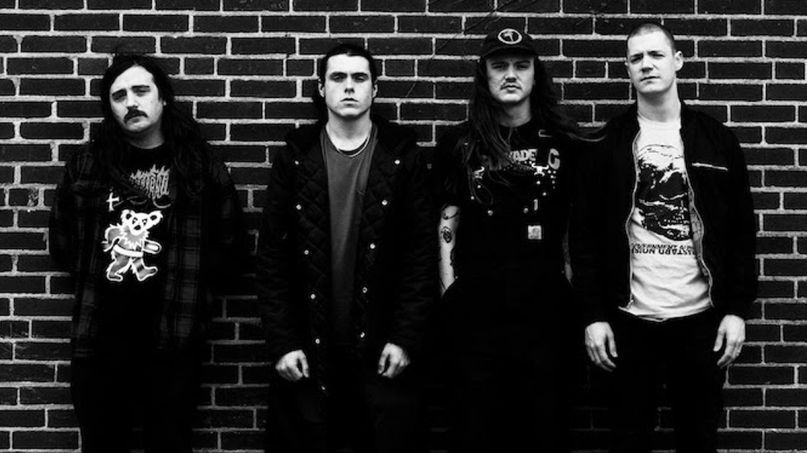 A little over a year since releasing their Weeping Choir album, Full of Hell have unleashed a brand-new song. The band has unveiled the single, “Language of Molten Cherubs”, as the latest entry in the Adult Swim Singles program.

As Full of Hell continue to push their music to uncompromising extremes, “Language of Molten Cherubs” is another burst of avant noise, free jazz rhythms, and harsh metal that defies convenient genre labeling. The band’s sonic concoction brims with ideas and layered overdubs, with frontman Dylan Walker’s voice cutting through the chaos.

“‘Language of Molten Cherubs’ is the final death gasp of a broken human being at the end of their rope, on the border between worlds,” reads a press release for the song. It’s unknown if the track is a holdover from the Weeping Choir sessions, as it would have fit well on that album and its barrage of electro grindcore. The band appears to have a thing for the single series format, offering a remix of their track “Thundering Hammers” to the Decibel Flexi Series last year, as well.

Walker has also been busy with a new supergroup, Sightless Pit, alongside fellow avant-metal artists Lingua Ignota and The Body’s Lee Buford. Their debut, Grave of a Dog, arrived earlier this year. Furthermore, Lingua Ignota and Full of Hell were scheduled to perform collaborative sets as “Artists in Residence” at the Roadburn 2020 festival, which was canceled due to the COVID-19 pandemic.

Stream Full of Hell’s  “Language of Molten Cherubs” via Adult Swim Singles below.