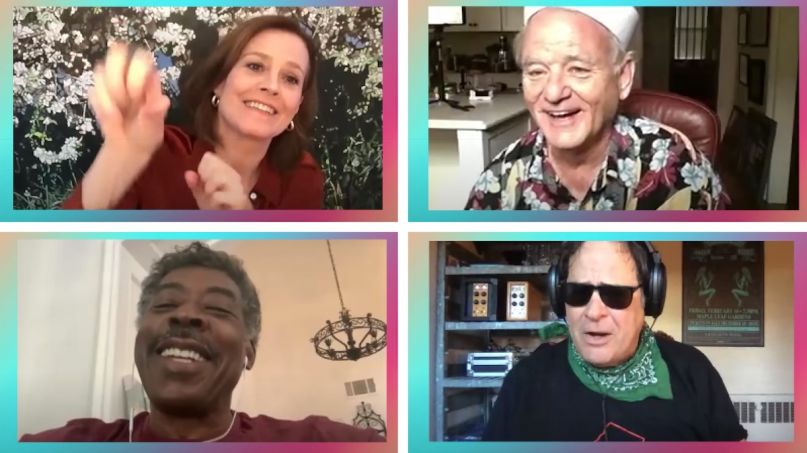 Josh Gad is quickly becoming the king of geekdom. With his new “Reunited Apart” video series, the Frozen actor has brought together our favorite characters from The Goonies, Back to the Future, and even Lord of the Rings. Now, Gad is pulling some strings to reunite the cast of the original Ghostbusters for a new YouTube livestream, too.

As is par for the course now, Gad broke the news of the next installment in his series with a goofy video reveal. In it, he calls up director Jason Reitman and badgers him about getting his father — Ivan Reitman, the director of the original Ghostbusters franchise — on the line. When the elder Reitman appears, Gad nervously asks if the “supernatural” crew from his repertoire would be up for a video hang.

Unexpectedly, Reitman says it’s up to Annie Potts (!) who then hops on the video conference and gives Gad the go-ahead by waxing poetic: “Do you believe in UFOs, astral projections, mental telepathy, ESP, clairvoyance, spirit photography, telekinetic movement, full trance mediums, the Loch Ness monster and the theory of Atlantis?”

That’s when we see the reunion of Ghostbusters‘ iconic cast memberscas: Bill Murray, Dan Aykroyd, Ernie Hudson, and even Sigourney Weaver. It’s going to be a real treat seeing the gang get back together again — and, considering the huge grins on their faces, it looks like they couldn’t be happier about it. (Unfortunately, there’s no sign of Gad’s Honey, I Shrunk the Kids sequel co-star Rick Moranis.)

Catch the “Reunited Apart” Ghostbusters livestream when it debuts this Monday, June 15th at 12:00 p.m. ET over on Josh Gad’s YouTube channel. It will also double as a fundraiser, with donations going to Equal Justice Initiative.

The younger Reitman director didn’t show up in the video conference in vain. If nothing else, it was a good reminder that we will get Ghostbusters: Afterlife on its new premiere date of March 5th, 2021. There’s less than a year to go until we get to see Paul Rudd splashed with gooey green nostalgia. It’s safe to say we’re counting down the months until then.

Who you gonna call? See you all Monday June 15th at 9:00 AM PT / 12PM EST for #GhostbustersReunitedApart in support of @eji_org — SUBSCRIBE NOW! https://t.co/276anwko4d pic.twitter.com/KCHd3UFmxi