Cast of Hamilton Perform “Helpless” with The Roots and Jimmy Fallon: Watch

As part of the "Global Goal" COVID-19 benefit concert 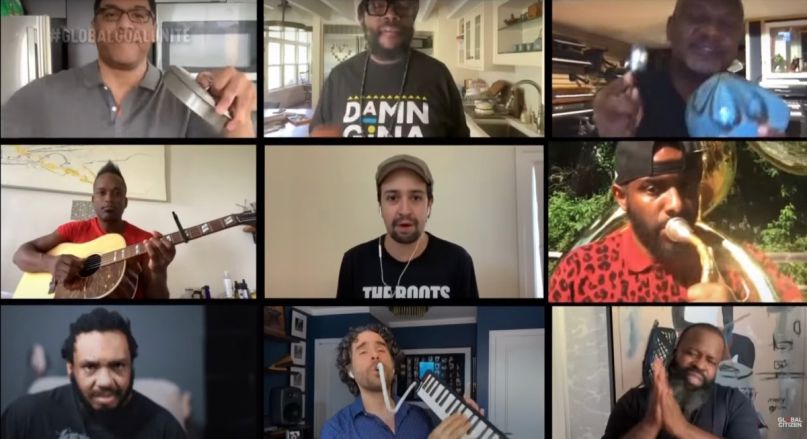 Hamilton cast with The Roots and Jimmy Fallon

The original cast of Hamilton reunited alongside members of The Roots and Jimmy Fallon to perform “Helpless” as part of Saturday’s “Global Goal: Unite for Our Future”. The benefit concert, which also saw Miley Cyrus cover The Beatles’ “Help!” from an empty football stadium, raised money for the coordination and development of COVID-19 tests, treatments and vaccines, and to ensure equitable access to citizens across the globe.

Phillipa Soo took the lead on “Helpess”, reprising her role as Eliza Schuyler Hamilton. Lin-Manuel Miranda popped in to deliver his rap verse, while other original cast members including Renee Elise Goldsberry, Jasmine Cephas Jones, Leslie Odom Jr., and Daveed Diggs also joined in. For their part, The Roots and Jimmy Fallon played along with real and household instruments. Watch the replay below.


Next Friday, a film version of Hamilton will premiere on Disney Plus. If you don’t already have the streaming service, Disney is currently offering a free 7-day trial for new subscribers.