The veteran rapper has also shared imagery tied to QAnon 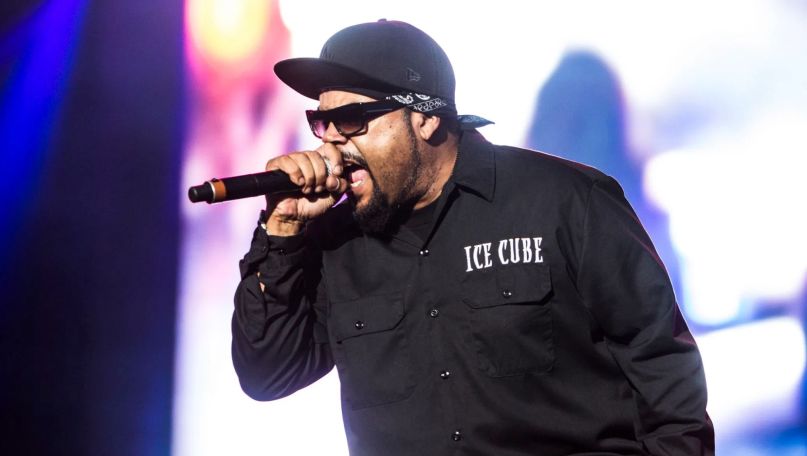 Since the murder of George Floyd spurred a nationwide uprising of police brutality protests, Ice Cube’s music, specifically N.W.A.’s “Fuck Tha Police”, has felt extremely on-point. His tweets, on the other hand, have not: the veteran rapper and actor has been uploading images promoting anti-Semitic and Russian propaganda.

On June 6th, Ice Cube tweeted an image of a mural that was removed from a wall in London’s East End for being anti-Semitic. The picture features a handful of caricatured Jewish businessmen playing a game of Monopoly on top of a table that sits on the backs of black men. The image itself contains the words, “All we have to do is stand up and their little game is over.”

Earlier today, he shared a picture of a black cube in the center of the Jewish Star of David. The purported meaning behind it is extremely convoluted, but it stems from a conspiracy that the three major religions, including Judaism, are influenced by shapes on the surface of the planet Saturn. Many people in Ice Cube’s comments are expressing disgust, but the ones who are praising him are posting other images that suggest that the “black box” is some sort of code that unlocks a massive conspiracy theory that Jews are responsible for events such as 9/11 and the pandemic.

Also today, the N.W.A. rapper posted a meme that claims the noses of ancient Egyptian statues were shot off by Europeans. As The Daily Beast reports, the meme was made by “Black Matters”, a “website and Facebook page that purports to be a non-profit news resource for African-Americans but was outed long ago as a Russian-run propaganda tool to manipulate Americans.” According to CNN, that claim about the statues is untrue, they were in fact damaged long, long ago by “soon-to-be rulers who were rewriting their own history.”

It’s unclear what motivated Ice Cube’s problematic Twitter streak. It’s especially surprising given that the other tweets on his page as of late have been distinctly anti-Trump, anti-racist, and/or pro-black. There’s a slight possibility he doesn’t “get” why these images are inherently problematic. After all, he did tweet a picture of a banner that says “Media is complicit” alongside the letter “Q”, only to later claim he was unaware of the letter’s association to QAnon, the pro-Trump conspiracy theory that suggests there’s a secret deep state that’s constantly plotting against our current president.

Sadly, Ice Cube isn’t the only hyper-political musical figure to completely contradict his music’s message in recent days. System of a Down drummer John Dolmayan has been sharing his support for Donald Trump and criticizing police brutality protests, an extremely hard pivot from the anti-police, anti-racist metal music he made his career off of.

FUCK THE NEW NORMAL UNTIL THEY FIX THE OLD NORMAL! pic.twitter.com/wNN3uwOb4K