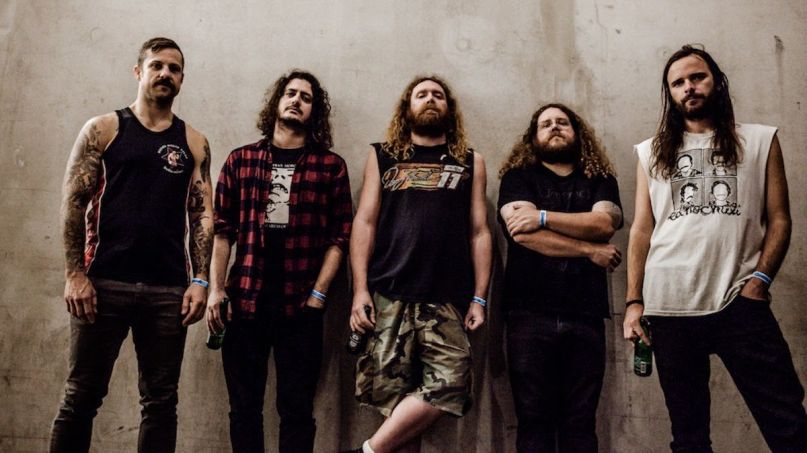 As previously reported, Inter Arma will release a collection of cover songs, Garbers Days Revisited, on July 10th. The Virginia metal band has now shared the latest track from the album, a passionately tongue-in-cheek take on the Prince classic “Purple Rain”.

According to the band, nobody was supposed to hear this song. Even during the making of Garbers Days Revisited — a nod to Metallica’s Garage Days cover projects — Inter Arma were cautious about sharing the daring, over-the-top rendition, which was created in the privacy of their own drunken shenanigans. Apparently the band went back and forth with their label, Relapse, about whether to include the song.

“This was never meant to be heard publicly,” the band stated in a press release. “It was meant to be outrageous — to be played late at night while laughing and drinking beer with our friends. Because that’s what this is: Inter Arma covering the greatest pop song of the 1980s, and arguably of all-time, by Prince, who hated when people covered his music.”

The statement continued, “The vocals were done in one take by the drummer and not pitch corrected, because who else can sing like that? Prince. So we opted to stay honest and simple because we never thought that the general public would hear it. Once Relapse heard it there was a little bit of back and forth between the two camps and it was decided, reluctantly, to be included on the record. We hope everyone enjoys this and gets a little bit of a chuckle because I think we could all use that right about now. Stay safe, stay outrageous, BLM.”

Drummer T.J. Childers vocals are indeed authentically theatric, but not so cheesy as to sound like karaoke. The chorus has a shambling, broken blues drawl that feels on the verge of collapse. Somehow, it all holds together. No wonder Relapse fought for its inclusion: It’s like hanging out in Inter Arma’s rehearsal space, hearing the band run through hits from their record collection. Other covers on the album include takes on Nine Inch Nails’ “March of the Pigs”, Neil Young’s “Southern Man”, and more.

“Covers have been an integral part of Inter Arma since the beginning of the band and some of these songs have a direct lineage while others are a little more… obscure,” Childers said when the album was announced. “As timing would have it, we hope this provides a bit of an escape for listeners, given the surreal circumstances we’re in at the moment…”

Pre-order Garbers Days Revisited via Relapse or Amazon. Stream the cover of “Purple Rain” below.