The bassist is making the most of his time in lockdown 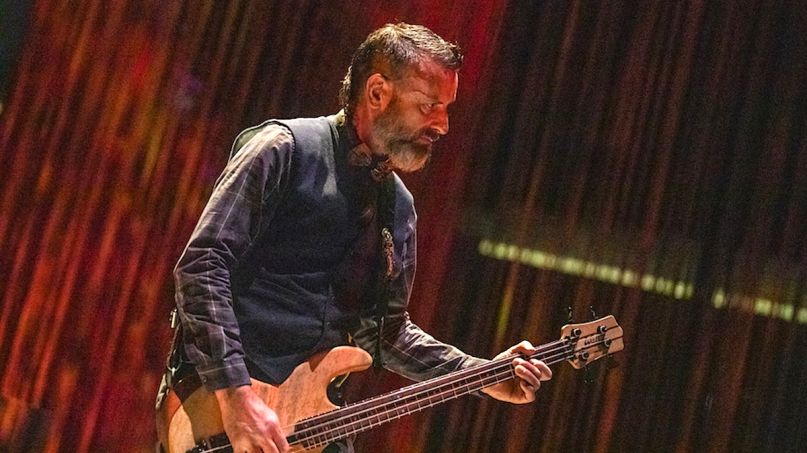 Tool bassist Justin Chancellor has been keeping busy with multiple projects during the pandemic, one of which is writing “interesting riffs” for his main band. Among his other ventures is “bouncing some ideas around” with Bauhaus legend Peter Murphy.

While checking in from lockdown with Bass Magazine, Chancellor offered up a glimpse of what his day-to-day life has been like since the COVID-19 pandemic forced Tool off the road. The bassist disclosed that he’s been cleaning up his house and gardening, as well as restoring a 15-foot Statue of Liberty head movie prop that he “purchased years ago on a tipsy impulse.”

When asked about his current and upcoming projects, Chancellor responded, “I’m working on tracks for a second MTVoid album/EP with Peter Mohamed, who is in Poland. It looks like it will have some cool guest contributions. I’ve been adding bass lines to a project headed by Canadian director Jimmy Hayward, as well as bouncing some ideas around with Bauhaus’ Peter Murphy.”

He continued, “After taking part in a Berklee Bass Department webinar recently, I’ve been invited to contribute to Steve Bailey and Victor Wooten’s upcoming Bass Extremes record. And last, but not least, I’ve written some interesting riffs which will be reserved for Tool!”

The last part about writing new Tool riffs falls in line with drummer Danny Carey’s recent revelation that the band plans to use the time off the road to write songs for a potential new Tool EP. Any new release would be a welcome surprise for Tool fans, who waited 13 years for the band’s 2019 album, Fear Inoculum.

Elsewhere in the feature with Bass Magazine, Chancellor said he’s been using the time to practice his instrument at home. “I’m definitely playing every day and working on using my pinkie a lot more; lots of four-finger scales up and down the fretboard,” he remarked. “I plan on breaking out my upright bass to explore a new frontier of low end for me.”

As far as the music that’s been helping Chancellor pass the time, the bassist has been listening to Gojira, Simon & Garfunkel, DJ Shadow, and Underworld.

Tool were forced to postpone their spring North American tour in support of Fear Inoculum due to he pandemic. The band hopes to announce rescheduled dates in the near future.