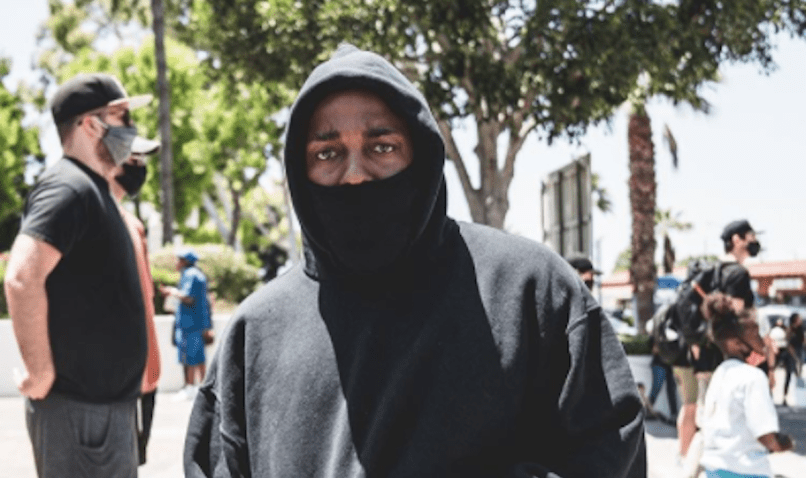 In the wake of George Floyd’s killing, Kendrick Lamar’s classic protest anthem “Alright” saw a 71% increase in streams, even as the MC himself declined to make a public statement. But the man who once rapped, “I don’t do it for the ‘Gram, I do it for Compton,” proved that this weekend, when he became a silent marcher in the June 7th Compton Peace Walk.

In contrast, no pictures showed Lamar without his mask, and you’d be forgiven for wondering if that’s even K-Dot, except that a tweet from his label seems to confirm his identity. But all of the photographs have something in common: the expression on Lamar’s face. From a distance, it’s easy to read too much into body language, but he looks weighed down, overburdened. In 2017 he spit the line, “I feel like I can’t breathe,” in reference to Eric Garner. Those words have renewed relevance after George Floyd’s murder, and perhaps Lamar feels like a modern-day Cassandra, foreseeing the future but cursed with the inability to prevent it. Or maybe the sun was just in his eyes — who knows? All we can say for sure is that he chose to march, and for his own reasons, he did so silently.

I owe everything to Black culture. The Black community has given me friendship, mentorship, kindness, love, music, creative inspirations, role models and so much more. The fight to end racial injustice is a long one, but one I’m committed to being a part of through my art and my voice. Black Lives Matter. This is a portrait I took of Kendrick Lamar today. All I did was say hello. Without asking, he stopped and posed. I gladly photographed him.

We gon’ be alright ❤️ #KendrickLamar