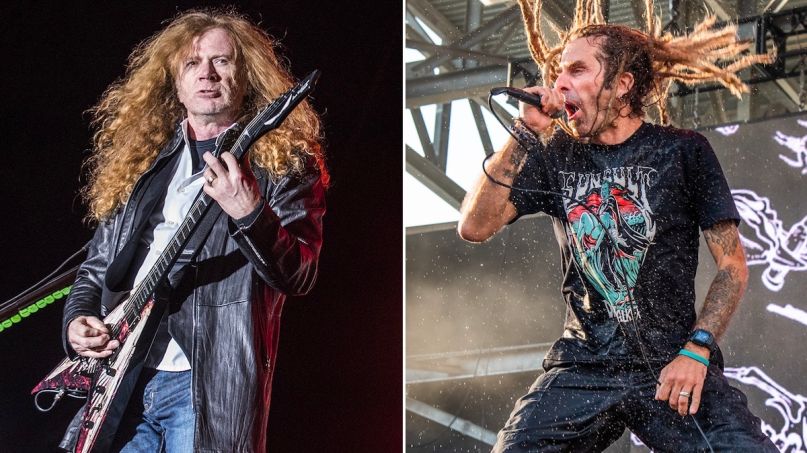 The summer leg of the “Metal Tour of the Year” featuring Megadeth, Lamb of God, Trivium and In Flames was recently postponed due to the COVID-19 pandemic, but the bands will still give fans a taste of the trek.

In lieu of the actual shows, the bands will broadcast a massive streaming event this Friday, June 12th, on what would have been the tour kickoff date. The event will be hosted by SiriusXM’s Jose Mangin, and the stream will feature full shows from all four bands, as well as an exclusive interview with each act before each set.

Megadeth will stream their 2016 secret show from Saint Vitus in Brooklyn; Lamb of God will offer up their surprise set at House of Vans in Chicago from February of this year; Trivium will bring out their 2019 performance from DreamHack Dallas; and In Flames will present their 2019 headline set from their own Borgholm Brinner festival in Sweden.

Along with the stream, there will be tour merchandise items that will only be available for 72 hours. A portion of the proceeds from the merch will go to Crew Nation, Live Nation’s fund to help support live music crews who have been directly impacted as shows are postponed and canceled due to COVID-19.

The “Metal Tour of the Year” will also take over Spotify’s “Kickass Metal” playlist starting Friday and feature songs from each band, as well as other metal acts.

While the summer leg is postponed, no announcement has yet been made regarding the tour’s fall leg, which is set to kick off in early October. Altogether, the massive North American tour would have hit 55 cities between both legs.

Megadeth recently hit the studio to officially start recording their new album, which will be the follow-up to 2016’s Dystopia. Lamb of God, meanwhile, are set to unleash their new self-titled LP on June 19th, after delaying the release due to the pandemic. The album can be pre-ordered here.