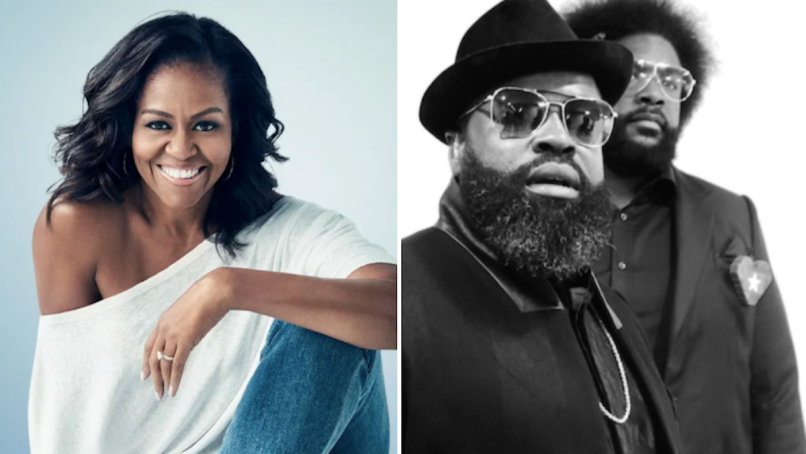 Michelle Obama and The Roots

Although the 2020 The Roots Picnic was a cultural casualty of the coronavirus crisis, The Roots themselves remain undaunted. The 13th annual edition of the Philadelphia music festival is going live virtually on June 27th, and it’s secured a heavyweight host in former First Lady Michelle Obama.

As you might expect, the new virtual festival has a different lineup than the one scheduled to take place back in May. In addition to The Roots themselves, the Picnic will feature performances from Kirk Franklin, Snoh Aalegra, EarthGang, G Herbo, Polo G, D-Nice, and Musiq Soulchild. Additional appearances will be made by Obama, Tom Hanks (!), Janelle Monáe, Hamilton creator Lin-Manuel Miranda, NBA superstar Chris Paul, actors Liza Koshy, Kerry Washington, and Tracee Ellis Ross, and Elaine Welteroth, the editor who transformed Teen Vogue into a leading voice of the resistance.

Obama’s voter registration organization When We All Vote is co-sponsoring the event with the goal of mobilizing 500,000 eligible voters. When We All Vote Managing Director of Communications and Culture Stephanie L. Young spoke about the importance of voting and how The Roots Picnic is helping:

“As we face one of the most challenging years for our nation, we could all use a moment of inspiration and light to help focus on what we can do to take action together — and that action is voting. When We All Vote is on a mission to change the culture around voting and we are committed to closing the age and race gap of those who show up at the ballot box, increasing participation in each and every election. To change the culture means we have to be in the culture, and iconic events like the The Roots Picnic, a celebration of the most influential artists of today, is just that.”

If you aren’t already registered to vote, you can do so now by visiting the organization’s website, or by texting ROOTS to 56005. When We All Vote is also seeking volunteers to digitally work during The Roots Picnic. The virtual festival kicks off June 27th at 7:00 p.m. EST, exclusively on YouTube.

Over the course of their 20-plus year career, The Roots have become a Philadelphia institution. Earlier this year the city honored them with Avenue of The Roots, a street named in their honor. Last December, The Roots debuted their first new song in two years, “Feel It (You Got It)”.

As for Michelle Obama,  the documentary she produced with her husband, American Factory, won an Oscar back in February. Becoming, a documentary based on her book by the same name, recently landed on Netflix with a score by Kamasi Washington. A few weeks ago, she and Barack hosted a virtual graduation ceremony for the class of 2020 featuring Lady Gaga, BTS, and Beyoncé.