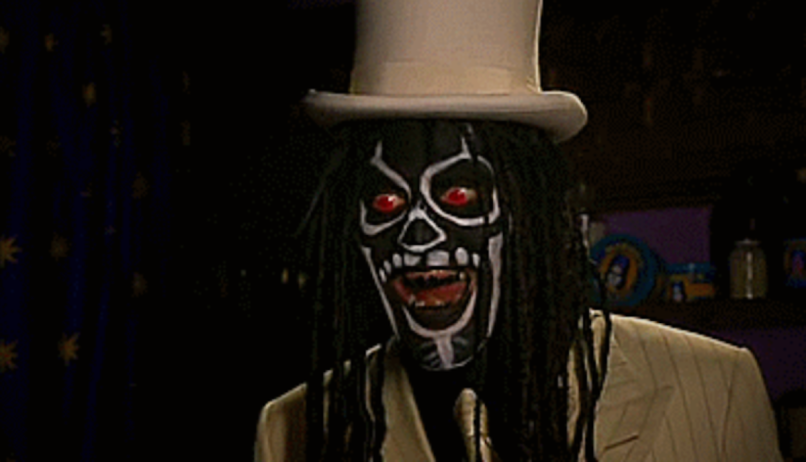 The Mighty Boosh character The Spirit of Jazz

In more signs that the times, they are a-changin’, streaming services have recently been purging themselves of movies and shows that depict racist or otherwise problematic characters. The latest such shift comes from Netflix, which has yanked British comedy show The Mighty Boosh because of a blackface character named The Spirit of Jazz.

Portrayed by Noel Fielding (co-presenter on The Great British Bakeoff), The Spirit of Jazz appeared in a handful of episodes during The Mighty Boosh’s three-series run from 2004 to 2007. Described as the ghost of Howlin’ Jimmy Jefferson, the character saw Fielding painting his face black with white skeleton-like highlights, speaking in a New Orleans accent, and wearing a dreadlocked wig under a tall, white top hat.

It’s far from the only problematic character Fielding and his Mighty Boosh partner, Julian Barratt, portrayed on the series. For example, Barratt played Rudi Van Der Saniel, a psychedelic guitarist with a huge afro with a door in it; at various times Barratt was painted black or an orange-brown for the part. Rudi at one point met up with a drummer named Spider Dijon, for which Fielding was painted brown and spoke in a thick Mexican accent.

Fielding also came under fire in 2017 when an image of him painted black to pose as the (white and blonde) tennis star Bjorn Borg went up for sale. A similar picture, only with Fielding wearing an orange wig and a pearl necklace, was placed prominently on the set of his own Channel 4 show Noel Fielding’s Luxury Comedy.

Netflix decision to remove The Mighty Boosh comes after it previously pulled a trio of British comedy shows — Little Britain, Come Fly with Me, and The League of Gentlemen — all over similiar blackface issues. In the case of the latter, the problem centered on the character Papa Lazarou, played by Reece Shearsmith, who paid his face black with white circles around his eyes and mouth. Shearsmith had previously defended the character to The Independent, saying, “It was not me doing a black man. It was always this clown-like make-up and we just came up with what we thought was the scariest idea to have in a sort of Child Catcher-like way.”

As Deadline reports, the BBC has yet to follow Netflix’s lead, as it still has The Mighty Boosh and The League of Gentlemen available its own iPlayer service. iPlayer also still features Summer Heights High and We Can Be Heroes, two Australian comedies Netflix removed from its service in Australia and New Zealand for blackface sketches and the use of the n-word.

Of course, American media has faced similar scrutiny in recent weeks. Jimmy Fallon was forced to issue another apology for an old Saturday Night Live sketch that had him play Chris Rock in blackface. Just yesterday, HBO Max temporarily pulled Gone with the Wind from its necessant service until a prefix could be added with “a discussion of its historical context and a denouncement of” the film’s “racist depictions” of black people.