So have songs by Public Enemy, D’Angelo, Killer Mike, and Childish Gambino 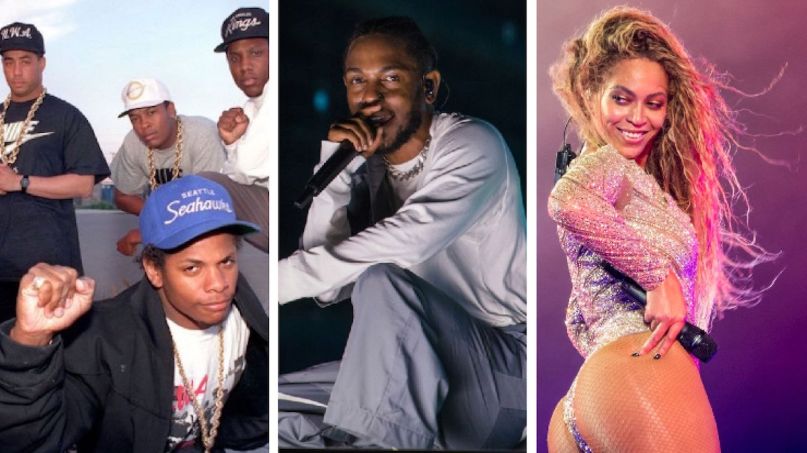 Following the murder of George Floyd, people have been protesting in all 50 states for the Black Lives Matter movement and against police brutality. Naturally, the process of fighting for justice lends itself to be soundtracked. So it should come as no surprise, then, that songs by N.W.A, Kendrick Lamar, and Beyoncé have all seen an increase in streams as a result.

N.W.A’s eternal classic “Fuck Tha Police” has become a modern political anthem once again, even being blasted over police scanners in Chicago by Anonymous over the weekend. According to Rolling Stone, that Straight Outta Compton cut has seen a whopping 272% increase in on-demand audio streams from May 27th through June 1st, as compared to its streaming numbers five days prior to Floyd’s death.

Protest songs by more contemporary black artists have skyrocketed on streaming platforms as well. Kendrick Lamar’s staple “Alright” went up 71%, a unifying single that FOX News once tried (and failed) to blame as being inflammatory. Beyoncé, who issued a statement regarding Floyd’s death, saw her track “Freedom” go up 70%. Others saw an even bigger jump, like Killer Mike’s “Don’t Die” spiking 542%, Childish Gambino’s breakout “This Is America” upped by 149%, D’Angelo and the Vanguard’s “The Charade” increasing by 122%, and Public Enemy’s “Fight the Power” being streamed 89% more than usual.

Listeners have been returning to some of the most classic protest songs, too, according to these statistics. James Brown’s 1968 song “Say It Loud — I’m Black and I’m Proud” saw a huge 455% increase and Nina Simone’s 1967 number “I Wish I Knew How It Would Feel to Be Free” went up by 34%.

Artists have been chiming in about Floyd’s murder and Black Lives Matter protests nearly every day now. JAY-Z called Minnesota’s governor to demand justice for Floyd, Fiona Apple marched in Santa Monica, and Halsey got hit by a rubber bullet while protesting in Los Angeles. Terrace Martin, Kamasi Washington, and Denzel Curry wrote a new protest song called “PIG FEET”. Even Bruce Springsteen and David Lynch have been showing up online to voice their support. If there’s one thing to take away from this, it’s that Americans are fed up with the pervasive, systematic, and harmful racial injustice the country’s black communities face.