Phoebe Bridgers on New Album Punisher: “I Think These Songs Are Wildly Better”

The rising songwriter talks collaboration, taking a break, and fostering a dog 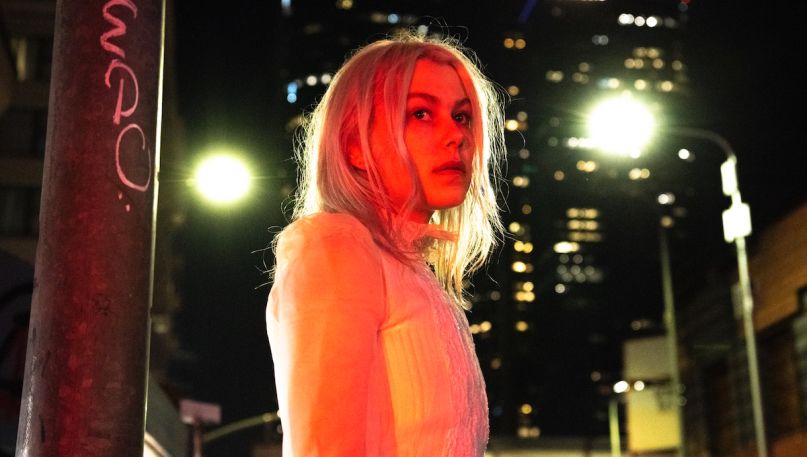 Earlier this month, indie-folk artist Phoebe Bridgers wrapped up a virtual world tour, where she made the trek all the way from her kitchen to her bed. She was supposed to be on an arena tour with The 1975 and beabadoobee this summer, but right now, the “upcoming dates” section of her website is adorned with a short, simple phrase: “*gestures at the entire world.” Her scheduled in-person appearance on Jimmy Kimmel Live! eventually turned into a performance from her bathtub, and the 25-year-old songwriter has made several other live-stream appearances, as well.

“The apocalypse is long and boring, but that’s a really fun part of it, just the fact that everybody else is bored in their house makes me feel connected in a way that I don’t typically feel when I’m by myself,” Bridgers says.

Her second album, Punisher, is a self-described “graduation version” of her 2017 debut, Stranger in the Alps. It centers on the notion of the super-fan, or punisher, who hangs out at the merch table and talks to the artist for an uncomfortably inappropriate amount of time. Although Bridgers has encountered her own fair share of punishers, this album sees her as the punisher herself. She wrote the title track about her musical hero, ‘90s indie-rocker Elliott Smith, who lived in her neighborhood of Silver Lake before his death. But the thematic elements of Punisher aren’t meant to be taken completely seriously.

“I think it’s just kind of tongue-in-cheek, actually,” she says. “Like it’s me describing myself in a self-deprecating way, which I think that larger thing is a theme, and being a punisher is just part of that umbrella.”

She’s kept herself busy in between releases, too. In 2018, she released an EP with Julien Baker and Lucy Dacus under the moniker boygenius. The following year she made an album with Bright Eyes’ Conor Oberst, the self-titled Better Oblivion Community Center, and sang on a track with The National’s Matt Berninger. This year, she’s appeared as a guest on songs from The 1975 and Paramore’s Hayley Williams.

Prior to the release of her highly anticipated sophomore record, we talked to Bridgers about returning to solo work after collaborating with a wealth of artists, writing more energetic material such as “Kyoto” and “Chinese Satellite”, and working with co-producers Tony Berg and Ethan Gruska again.

On How She’s Been Spending Quarantine

I’m not starting to go places. I did go to a protest, but other than that, I haven’t been out. It just feels too weird, you know? I’m trying to see how the rest of the world’s musicians are adjusting, and I’m trying to have cool ideas and make some stuff from my house, like I just sang a karaoke set for a show. I’m trying to get a little creative and not put as much pressure on myself to finish stuff. Being in the press cycle makes me feel like I’m working, but there’s going to be a point this year where I want to make something else and probably record.

On Returning to Solo Work After Heavy Collaboration

It was great returning to solo work, but it’s a misnomer because I feel like I went and gathered all these friends who then played on the record. I feel like I actually collaborate with more people in my solo music technically because I have more freedom. It’s not a band; people can come and go as they please. The environment of Sound City Studios is very collaborative, so it’s a big part of my music.

I think it’s just more fun to play live. That might be something I learned from my collaborations: the more fun a song is to play live, the more I like it over time, whereas I get kind of exhausted playing sad songs over and over and over. I love playing sad songs, just not an entire set, so it’s basically like a treat to give myself to break up the monotony of my set.

On the Seamless Transition Between Albums

I like repeating themes and repeating melodies. I think it makes an album an album and something kind of cohesive. Also, on “DVD Menu”, we sampled the last song from my first record, like my voice is just backwards on it. And even if nobody notices it, it’s a weird mental satisfaction to have, like I have some sort of lineage going.

On Working with Tony Berg and Ethan Gruska Again

I think we’re just starting to have fun; I can’t wait to go back. It actually kind of blows my mind that people try to make records with different people. Maybe they have a bad experience, but I know some people don’t have great experiences with a producer and leave that and try something else. But I feel like we’re just getting used to each other, and I think we made a totally different-sounding record, or at least like a graduation version of the first record. It was perfect.

On How the Creative Process Differed from Stranger in the Alps

Well, on the first record, I was afraid of writing songs. I really wanted to have songs and be a musician, but I didn’t like writing. So, I had a lot of leftover songs from my teen years that made it on Stranger in the Alps. This time I feel like the songs are wildly better because it’s me as an adult. I’m getting less afraid. I’m surrounded by more people who can affirm me and help me, and Conor [Oberst] edited a lot of songs for me, adding lines here and there. But he also told me if something was good or bad, and I had a safety net and a little bit more confidence.

On Releasing Punisher into the World

My livelihood was on the line when I released my first album, and it’s not anymore. I know that I’m releasing it out into a world where people will at least hear it, whether or not they like it. So, I’m definitely more certain. It feels great. I think it makes some people nervous when they have more eyes on them, but it actually just makes me relaxed because it’s my day job now, which is sweet. My next plan is just writing some music for fun and seeing what comes of it.

On Taking a Break Right Now

I’m really enjoying the lack of pressure there is right now because I just finished something, so I’m trying to write and trying to make stuff that I like for no reason. And whenever I use it, whether it’s in another band or for my next record, the pressure’s off and I’ve been enjoying that. I try to turn off my phone every once in a while. I want to stay informed. It’s a constant game to ride the line between staying informed and just punishing yourself with the news every day. I’m also trying to read, relax, and write.

On the Inspirations Behind Punisher

I was listening to a lot of Mitski. My friends are definitely my biggest inspirations, for sure. I stole a lot of production ideas from Bright Eyes and Julien [Baker] and Lucy [Dacus], and even my bands with those people. So many of the people who played on the record were themselves influences. Jim Keltner played with Bob Dylan and about a million of my other favorite musicians. Blake Mills’ latest album that just came out was being recorded at the same time. He played on the record, and that was a huge influence. He’s just an amazing presence at Sound City. He’s always doing something crazy and cool in the A room, and I record in the B room, so he did then. He plays clarinet on “Savior Complex”, and he plays guitar on “Halloween”.

On Getting a New Dog

I’ve been trying really hard to foster a dog, but it hasn’t been working out. My pug passed away at the beginning of last year, so I’m ready. I think having a dog is important, and I think that with my normal job, it would be impossible to have a dog, so in this world where I’m at home all the time, it’s a perfect situation.

Order Punisher here or pick up the album here.