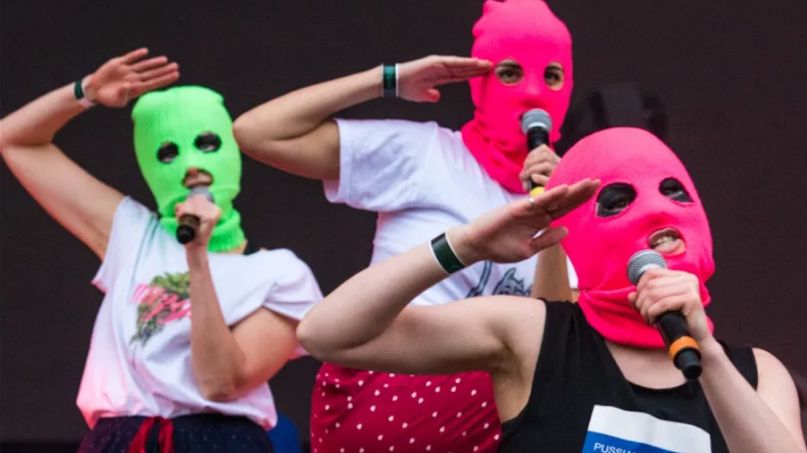 This past week has been rife in police protests, rampant looting, burning buildings, and a blatant lack of equality following the death of George Floyd. During all of this, President Donald Trump has been, to quote Taylor Swift, “stoking the fires of white supremacy and racism.” So it was only a matter of time until politically driven punk group Pussy Riot stepped in to write “1312”, a new song about ending police brutality.

“1312” sees the Russian group collaborating with Argentinean artists Parcas, Dillom, and Muerejoven as a form of solidarity — similarly to their Vic Mensa track “Hangerz” — to honor “the bravery and strength shown in front of abusive police forces” at Chilean protests. Musically, “1312” is a hybrid of blown-out grunge beats, throat-scratching screams, punk rock breakdowns, and manic rapping. It’s an aggressive sound that matches the song’s lyrics, calling out the police forces as rapists of freedom and liberty.

To coincide with the release of their international activist song, Pussy Riot have also outlined their beef with police in three extensive bullet points. The primary issue is that police forces are physically violent with protesters, even when they’re marching peacefully; they’re “ineffective” when fighting “real crime” like femicides, murders of political activists, kidnappings, and domestic violence; and they only serve their own interests and the interests of those with money and power.

Pussy Riot have outlined solutions to these problems, too, to prove that the problem can be remedied. A peaceful agreement can be reached by refocusing police forces towards the protection of civilians, holding police accountable for acts of violence, demanding police allow activists to speak freely at demonstrations without harming them, asking police to join in the march for racial and gender equality, and retraining police forces to protect everyone’s rights, not just their own.

“1312” comes with an aggressively animated music video by Vladimir Storm. In it, cop cars can be seen driving through a city wrecking havoc in a gelatinous world. All four artists are on the street waving around protest signs, weapons, and candy. In between scenes, a sea of crosses can be seen burning while lyrics from the song crash down from the sky. The whole thing was rendered with 3D art that looks like a blend of claymation and slime. Watch it below.