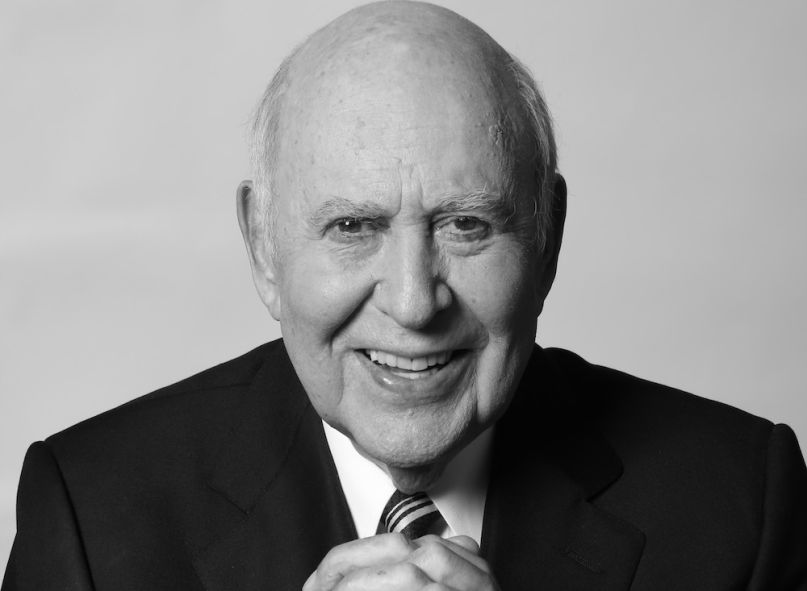 Carl Reiner, the legendary comedian, actor, and director whose career spanned seven decades, has died at the age of 98.

According to TMZ, Reiner died Monday, June 29th, at his home in Beverly Hills.

Born in New York City on March 20th, 1922, Reiner grew up in a Jewish immigrant family from The Bronx. Entertainment came calling for Reiner when his older brother Charlie clued him into a free dramatic workshop being put on by the Works Progress Administration. As we know now, talent runs through the Reiner family tree, and it was his uncle Harry Mathias who would set the bar by becoming the first entertainer of their bloodline — a bar that Reiner would all but shatter.

Case in point: Not even World War II could stop Reiner’s pursuit of the stage. Although he was drafted into the Army Air Forces in 1943, a three-month bout of pneumonia sent Reiner to Georgetown University, where he put on a Molière play entirely in French after learning the language as an interpreter. Having amused the men at top, Reiner was eventually transferred to Special Services to entertain troops around the Pacific until he was honorably discharged in 1946.

By the early ’50s, Reiner had already conquered Broadway and was primed for the next chapter of his career. The proverbial page turned for him when he was cast in Sid Caesar’s Your Show of Shows, a gig that would ultimately define his life by pairing him alongside writers Mel Brooks and Neil Simon. Shortly after, the three of them went to work on Ceasar’s Hour, where he’d expand his repertoire of talent with the likes of Woody Allen, Larry Gelbart, Mel Tolkin, and the list goes on.

It was the ’60s, however, that catapulted Reiner into universal stardom. He and Brooks launched their own brand on The Steve Allen Show as a duo, a collaboration that would lead to the recording of five comedy albums (the final one winning a Grammy) and a 1975 animated television special. As if that weren’t enough, Reiner pivoted again by developing one of the most iconic and celebrated television shows of all time — The Dick Van Dyke Show — which tipped off his directing career.

And what a career that would be: After adapting his own autobiographical novel with 1967’s Enter Laughing, Reiner directed his pal Van Dyke in 1969’s The Comic, gave George Segal a black comedy in 1970’s Where’s Poppa?, brought George Burns down from the heavens in 1977’s Oh, God!, pulled Henry Winkler out of the Cunningham household for 1978’s The One and Only, and gave Steve Martin the role of his lifetime and career in 1979’s diamond comedy The Jerk.

In our oral history of The Jerk from this past January, Reiner reflected on the production: “They came to me and they already decided that they were going to make the film. And none of them were filmmakers, so I sort of guided the whole film as a pro filmmaker. But Steve [Martin] was a genius waiting to be recognized as a performer. He and I used to travel together, to go to the set every day, and, one day, we found a piece of gold.”

Of course, none of this stopped Reiner from appearing in front of the camera. There are far too many roles to name — both on the silver screen and the boob tube — though film highlights include the voice of god in Brooks’ 1981’s The History of the World, Part 1, his role as Mickey in 1998’s Slums of Beverly Hills, his balmy presence as Saul Bloom in Steven Soderbergh’s Ocean’s trilogy, and, more recently, his stint as Carl Reineroceros in last year’s Toy Story 4.

As for television, Reiner had either guest roles or cameos in — ahem — The Carol Burnett Show, Frasier, Mad About You (where he won a Primetime Emmy), The Larry Sanders Show, The Bernie Mac Show, Ally McBeal, Boston Legal, House, Two and a Half Men, American Dad, The Cleveland Show, Parks and Recreation, Bob’s Burgers, Family Guy, Angie Tribeca, and you get the point.

Not surprisingly, Reiner was elected into the Television Hall of Fame in 1999, and was awarded the Mark Twain Prize for American Humor at the Kennedy Center a year later. In addition to his work in Hollywood, Reiner also penned over a dozen novels, including several memoirs, the last of which was 2017’s Too Busy to Die.

A lifelong Democrat, Reiner was always vocal about his politics. He publicly endorsed Bernie Sanders, and more recently, threw his support behind the Black Lives Matter movement alongside his near-lifelong partner-in-crime Brooks. In fact, at the age of 98, he was one of the oldest celebrities on Twitter.

Legend is an understatement; Reiner was an institution, and one we’ll be celebrating, revisiting, and discussing until the very foundation of Hollywood crumbles beneath itself.

Nothing pleases me more than knowing that I have lived the best life possible by having met & marrying the gifted Estelle (Stella) Lebost—who partnered with me in bringing Rob, Annie & Lucas Reiner into to this needy & evolving world.

Last night my dad passed away. As I write this my heart is hurting. He was my guiding light.

Dearest Carl this was your last tweet always always caring til the end. We shall miss you very much ❤️❤️❤️❤️❤️❤️❤️❤️ https://t.co/5OvzIC3M5h

A picture of Carl Reiner with daughter Annie and recent birthday boy, Mel Brooks all in Black Lives Matter shirts. Fourteen hours ago, he tweeted a multi-part appreciation of Noel Coward. Reiner turned 98 in March. That's a lot of time spent being a good human. pic.twitter.com/Da1mmPpeFM

Very sad to awake to the news that @carlreiner has passed. There will forever only be one of him. May his memory be forever blessed. He leaves us with so much laughter. My heart goes out to @robreiner and the entire Reiner family.

My friend Carl Reiner died last night. His talent will live on for a long time, but the loss of his kindness and decency leaves a hole in our hearts. We love you, Carl. pic.twitter.com/QWyNOYILhW

He was a legend, a patriot, and a beautiful, caring man. He helped me personally and inspired me. He didn’t live long enough to see his beloved country restored but he looked forward to that day.

And it will come.

Mel Brooks drove to Carl Reiner's house every night so they could have dinner & watch Jeopardy! together. This article about their 70-year-long friendship, written in February just before the lockdown, is so wonderful: https://t.co/5b7K30gwiC https://t.co/xAK3NkLMb1