It will fall into place with some assistance 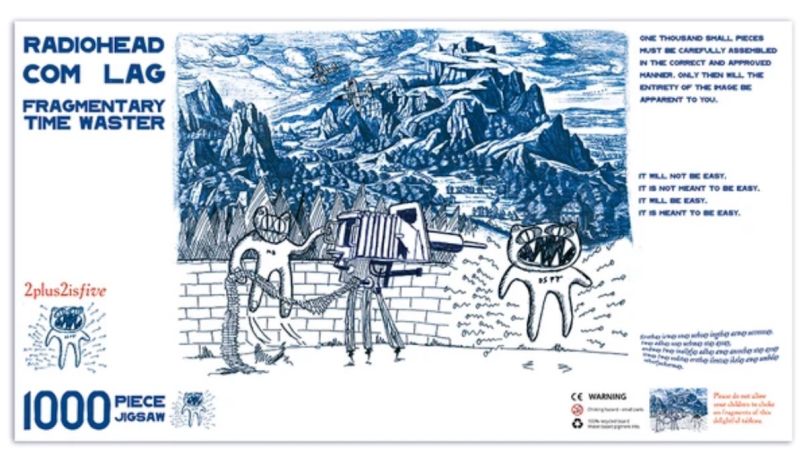 Radiohead have been quite the saviors when it comes to curing quarantine-induced boredom. Over the past few months, the alt-rock icons have been running a weekly concert series, Ed O’Brien dropped his debut solo album, and Thom Yorke unveiled a gorgeous new song. Now, Radiohead are opting for a more physical way to pass the time with a 1000-piece jigsaw puzzle.

In an email announcement sent out to fans, Radiohead revealed they’re selling a “Radiohead Fragmentary Time Waster”, better known as a branded jigsaw puzzle of the fantastical Com Lag artwork. It’s made from 100% recycled material, image printed on an FSC paper source, uses water-based inks, and comes with a cotton cloth bag to house the pieces inside the box. The only downside is that it won’t fall into place on its own.

In classic Radiohead fashion, they revealed the new merch item with a tongue-in-cheek poster. “Bored? Got nothing to do? Fed up? Nothing on the TV. No way! What you gonna do? Gonna get a jigsaw innit,” the advertisement reads. “Tell me more, tell me more! A Radiohead jigsaw. Has it got loads and loads of pieces? A thousand. Is it really difficult and will it take ages? I reckon so, yeah. Sounds great! Is it affordable? Depends on your finances. Is there a chance you could still be bored after completing it? Yeah probably. Sounds amazing!!!”

Pre-order the jigsaw puzzle for $35 at the WASTE website before it sells out — because, let’s be honest, it definitely will.

Most fans are probably reading this news story while “Jigsaw Falling Into Place” plays inside their heads. If you’re one of them, then consider revisiting the magical In Rainbows — From the Basement video sessions or getting lost in the virtual stacks of the Radiohead Public Library where all of their 2007-era glory is archived in great detail. Then when you’re ready to segue back into modern day, treat yourself to Yorke’s captivating Sonos Radio Mix featuring everyone from Duke Ellington to Thee Oh Sees.