Ranking: Every Clerks Animated Episode from Worst to Best

by Matt Melis and Ben Kaye 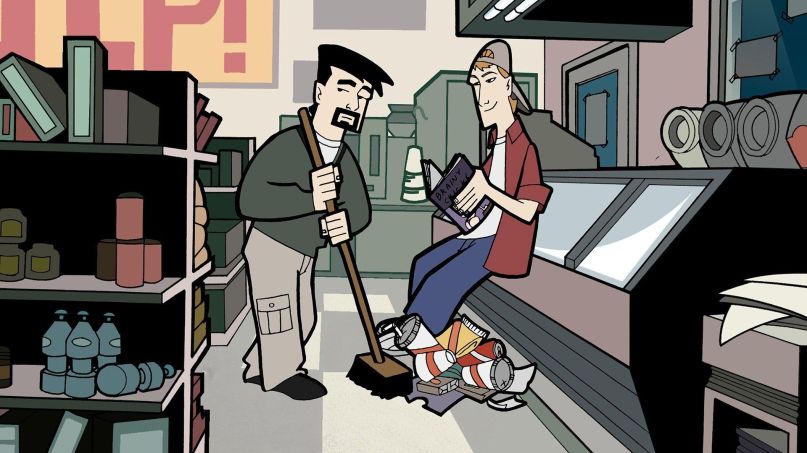 Nothing about Kevin Smith’s 1994 cult-classic film Clerks lent itself to making an animated version for ABC. Not the maxed-out credit-card budget, not the grainy, black-and-white cinematography, and surely not the foulmouthed, esoteric nerding out about innocent plumbers dying on the Death Star or how much the average jizz mopper makes working a nudie booth. And yet, thanks to studio politics, the Disney-owned network is exactly where the animated adaptation landed. It was no surprise then when the premiere got bumped back to the pilot graveyard that is summer, only two of the original six episodes aired on the network, and Dante and Randal curtly got told that they weren’t supposed to be there today … or any day for that matter.

No, Clerks the cartoon dropped dead quicker than Julie Dwyer in that YMCA swimming pool, but the show wasn’t buried. The series found its intended audience on DVD, and Comedy Central — home of the even fouler-mouthed boys of South Park — finally showed the entire series, including the four never-aired episodes, in late 2002. Those who eventually found the show discovered a more fleshed-out Leonardo — home of the Quick Stop — complete with hometown villain (Leonardo Leonardo), new friends (“hey, there’s that kid in the helmet … look at him”), and, oh, yeah, the customers. It’s a day-in-the-life of two blue-collar schmoes turned into weekly episodic adventures clearly written by those who had watched as many movies and imbibed as much pop culture as Randal.

Now, 20 years later, Clerks: The Animated Series stands as a strange artifact of its time: a series that nobody asked for (and now some can’t get enough of) that aired for two weeks on a network that clearly didn’t want it. To learn more about how this unlikely project came to be and its chances of returning, check out our exclusive oral history. And in the meantime, take a look at how two Kevin Smith fans look back fondly (and not so) at the series.