The track is the latest released under Refused's in-game band name, Samurai 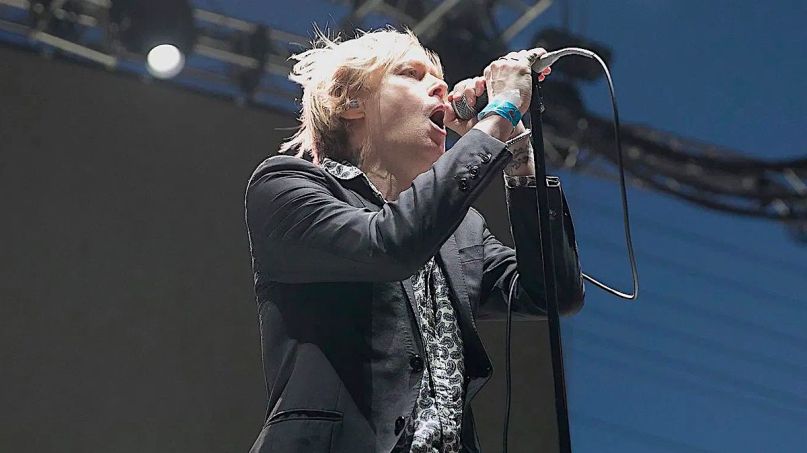 Refused have released a new song, “The Ballad of Buck Ravers”, under their video game guise Samurai. The hardcore punks will appear as the fictional band in the upcoming video game Cyberpunk 2077, which is now due out on November 19th.

“The Ballad of Buck Ravers” is the third Samurai track we’ve heard following “Chippin’ In” and “Never Fade Away”, both released last year. Fortunately for Refused fans, the band only changed in name for Cyberpunk 2077, as the song delivers the hardcore ferocity the Swedish act has been churning out for nearly 30 years.

Musically, this is classic Refused, with frontman Dennis Lyxzén shouting and wailing above aggressively smashed chords: “Lost another day to pointless drudgery / The slow chipping away/ Of my autonomy”. Refused’s vision of 2077 sounds a lot like 2020, if that’s any indication of their bitingly sarcastic worldview.

The appearance in Cyberpunk 2077 is the latest chapter in a massively successful return for Refused, beginning with their 2015 comeback album, Freedom. The band followed with War Music in 2019 and buoyed that release with singles from their video game alter-ego. “Chippin’ In” has garnered over four million YouTube views to date — a testament to the dedication of gamers and the cyberpunk community alike, both of which are eagerly awaiting the game’s release.

Cyberpunk 2077 is coming to Xbox One, PS4, and PC, and depicts a dystopic future metropolis where the player assumes the role of a “cyber-enhanced mercenary outlaw.” Adding to the game’s celebrity cast, Keanu Reeves will be featured as an in-game character and other notable artists such as Grimes, Run the Jewels, and A$AP Rocky also contributed music to the soundtrack.

Pre-order Cyberpunk 2077 here. Stream “The Ballad of Buck Ravers” below.