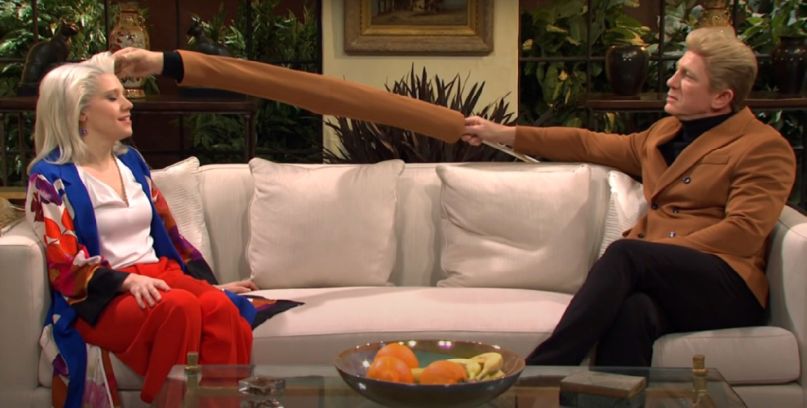 Saturday Night Live’s main function is to comment on our present reality. But it turns out that, much like The Simpsons, NBC’s long-running TV show might have actually predicted the future. As New York Times culture reporter Dave Itzkoff has pointed out on Twitter, a sketch from early 2020 that parodied how soap operas might film in the time of social distancing is no longer just a comedic fantasy.

Aired March 7th, the skit called “The Sands of Modesto” depicts a fictional soap opera that begins with a message to viewers that “the staging of certain scenes has been altered for the actors’ safety.” Throughout the bit, every physical interaction that SNL star Kate McKinnon has with others is hastily staged in a way that’s intended to comply with social distancing measures.

The superfluous hand sanitizer usage and obviously spliced-in video of a handshake is unrealistically over-the-top. There’s also an absurd moment when guest host Daniel Craig attempts to have an intimate moment on the couch by using a fake arm to stroke McKinnon’s hair from six feet away. As ridiculous as it all seemed at the time, at least one TV executive is preparing to try that sort of thing on set in earnest.

In a recent Hollywood Reporter interview, Bradley Bell, executive producer of The Bold & the Beautiful, suggested that unconventional tricks like those used in the SNL skit are what’s apparently going to get the CBS daytime show back on the air while COVID-19 rages on. According to Bell, he and his coworkers are aiming to keep every single person on the set at least eight feet apart at all times, which the interviewer notes might be challenging during close-contact scenes.

“[We’ll] use the tricks of the business,” Bell explained. “We’ll shoot one side of the couple in a romantic scene alone in the room, but looking at a spot very close to them, and then shoot the other side alone. When we edit it together, it will look like they’re nose to nose.”

Bell affirmed that they’ll be relying more on post-production than in the past, but he also revealed another social distancing strategy that could’ve easily been another part of that SNL sketch.

“We’re also bringing in, in some cases, the husbands and wives of the actors as stand-ins for their [characters’] significant others. So if you see hands touching faces in close proximity from a wide shot, instead of a stunt double we’ll have a love-scene double, where it will be the husband or the wife doing the actual touching. Then when we edit it together, it will look like our couple on screen.”

There’s something charming about these quaint, early cinema techniques being employed in an era of visual media when high-end special effects are usually the go-to approach. And if it actually ends up keeping people safe, then good on them.

Back in May, SNL wrapped up its 45th season with a special “At Home” episode, in which all of the cast members filmed from separate locations.