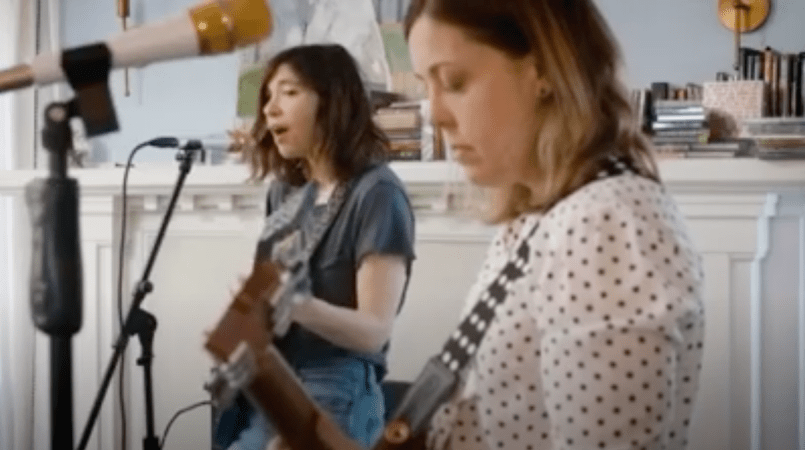 Washington-based musicians gathered virtually on Wednesday night for the  “All In WA: A Concert for COVID-19 Relief” benefit livestream. In addition to Pearl Jam delivering their first-ever performance of “Dance the Clairvoyants”, the show also featured appearances from Ben Gibbard, Brandi Carlile, Dave Matthews, Sir Mix-A-Lot, and more. Olympia favorites Sleater-Kinney were also on hand, playing a stripped down version of “Modern Girl”.

Now a duo of Carrie Brownstein and Corin Tucker after the departure of drummer Janet Weiss last year, Sleater-Kinney are without a full-time drummer. So as the pair played their guitars in a big, sunny room, the only other individual on camera was an adorably uninterested golden retriever, who perked up most when Tucker whistled through the bridge’s harmonica part. Though necessary given the pandemic, the whole set up seemed something like a nod to the The Woods cut’s music video, only the band has grown up and filled out that empty room.

As for the rendition itself, without the full system and drums, “Modern Girl” almost felt like it could’ve been recorded for one of those Rockabye Baby! albums. Watch an (admittedly not so great) rip of the performance below (via Stereogum).

With a new drummer in tow, Sleater-Kinney were meant to be on the road with Wilco this summer. There’s hope the joint trek will be rescheduled for 2021, but until then, you can relive one of the band’s classic performances at DC’s 9:30 Club thanks to NPR’s newly unlocked archive.