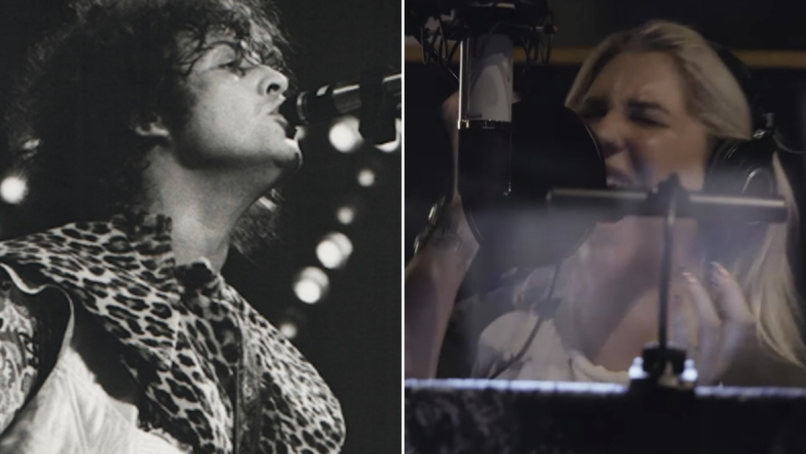 Later this summer, Marc Bolan and T. Rex will be celebrated with a massive tribute album called AngelHeaded Hipster. Produced by the beloved Hal Willner prior to his death, it features Bolan classics covered by prominent acts like U2, Father John Misty, Elton John, and Joan Jett, among others. Following Nick Cave’s rendition of “Cosmc Dancer” comes a second preview of the release, 1972’s “Children of the Revolution” as reimagined by Kesha.

While known for her catchy pop hits, the High Road star also possesses incredibly powerful pipes, which she showcases on today’s cover. Whether the note’s high or low, the singer punches each one with fierce passion — the kind that would make Bolan proud. Check out the cover below via a clip comprised of Kesha’s in-studio footage and archival video of T. Rex.

In a statement, Kesha spoke about her first encounter with the late Willner and the impact T. Rex has had on her own glam-leaning pop career,

“Through a stroke of luck, I met the incredibly talented and kind Hal Willner,” Kesha says. “We were in the same studio and he said he liked my red nudie suit, and then when he mentioned that he was working on a project that involved honoring Marc Bolan, I excitedly started rambling about how much T. Rex has influenced my music and my style. Right there we decided to record our own incarnation of ‘Children of the Revolution,’ a motherfucker of a song! I’m excited for the world to finally hear it! This project was so exciting and important to the late great Hal, and I’m humbled to be a part of this project honoring one of the most magical artists of the 20th century.”

AngelHeaded Hipster officially arrives September 4th through BMG. The album comes as Bolan, who died in 1977, and the rest of T. Rex are set to be inducted into the Rock and Roll Hall of Fame later this year.