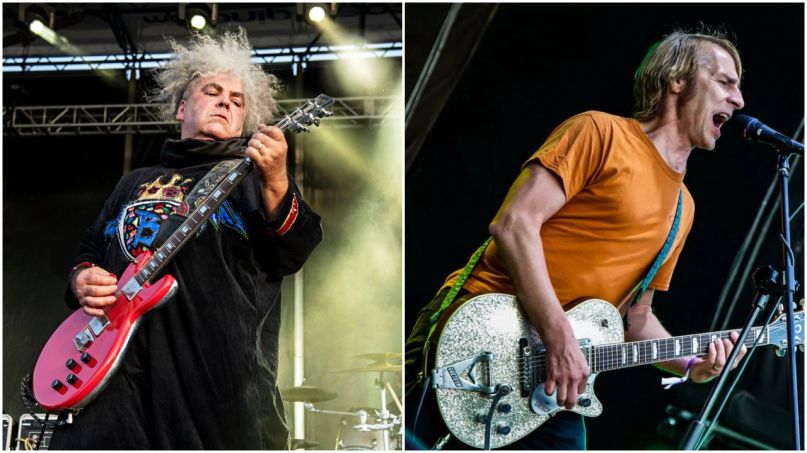 Two Seattle institutions, Melvins and Mudhoney, have teamed up together for a collaborative EP called White Lazy Boy. The four-song affair features two new songs from the superduo, as well as covers of Black Flag’s “My War” and Neil Young’s “Drive Back”.

Melvins have been churning out their signature blend of grunge, sludge metal, and noise since the mid-80s, and here frontman Buzz Osborne, drummer Dale Crover, and recent addition Steve McDonald (also of Red Kross and OFF!) work swimmingly with Mudhoney’s Mark Arm and Steve Turner.

Rather than making this a traditional split release where each band contributes a song or two, that gang of five collaborated together on two new songs, “Walking Crazy” and “Ten Minute Visitation”, that mesh the controlled chaos of the Melvins with the down-and-dirty grunge of Mudhoney.

Their choice of cover songs straddles a similar sonic binary. They turn Black Flag’s snarling “My War” into a thunderously loose rock banger, and Neil Young’s Crazy Horse jam, “Drive Back”, into a heavier, grislier Southern rock jamboree from hell. Take a listen for yourself below.

The project was released via renowned noise label Amphetamine Reptile Records. However, it was only available via CD (no digital or vinyl editions) and is currently sold out, so technically there are no “official” ways of procuring the EP at this moment. Keep an eye on their online store for when the project eventually (maybe?) gets restocked.

A couple weeks back, Mudhoney put their 2007 live album Live Mud on Bandcamp after years of it only being available as a vinyl release. In August, Melvins’ King Buzzo will release his acoustic solo album Gift of Sacrifice, which was pushed back from its original May 15 release due to the coronavirus.