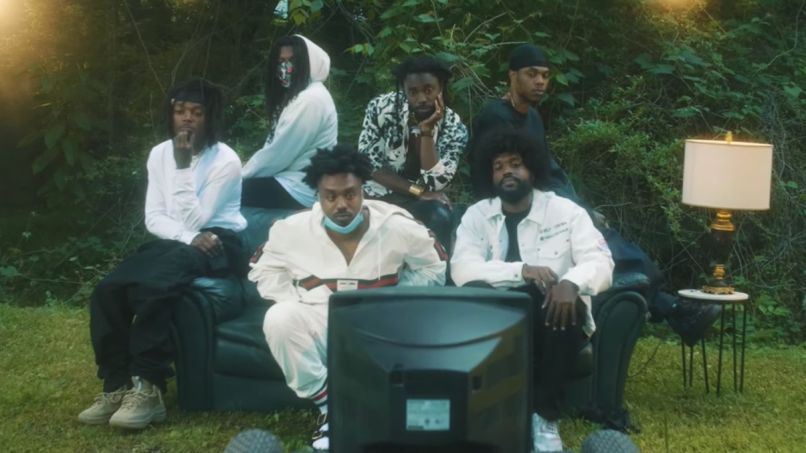 Spillage Village, a supergroup featuring EarthGang, J.I.D. and 6LACK, are back with their first single since 2017. Titled “End of Daze”, it’s taken from their upcoming album due out this summer.

Rounded out by Mereba, JurdanBryant, Hollywood JB, and Benji, the Atlanta-based Spillage Village penned the new song entirely during quarantine. As the title suggests, much of the lyrics reflect on the apocalyptic-nature of this pandemic era; the track also happens to be a timely offering given the protests taking over the streets of America.

Today’s cut was recorded at J. Cole’s Dreamville Records, EarthGang’s label. It was produced, mixed, and mastered by Mike Dean, our 2018 Producer of the Year known for his work with JAY Z, Travis Scott, and The Weeknd.

Check out “End of Daze” below via its corresponding video. Directed by Caleb Seales, it includes references to Breonna Taylor and Ahmad Arbery, two black people who recently died at the hands of police brutality.

Spillage Village are expected to drop a new album sometime this summer. It follows their 2016 project, Bears Like This Too Much. In our Artist of the Month feature with EarthGang, member Johnny Venus spoke about the magic behind the supergroup:

“Instead of just hopping in the booth and taking this flow because it’s the hot flow right now, then using it to jam your material down people’s throats. We want to present a new way of using and approaching sound. That’s what we try to achieve every time we go into the booth, and we get a little closer every time. As a unit, I think that the best thing about Spillage Village is that we all try so hard to push ourselves.”