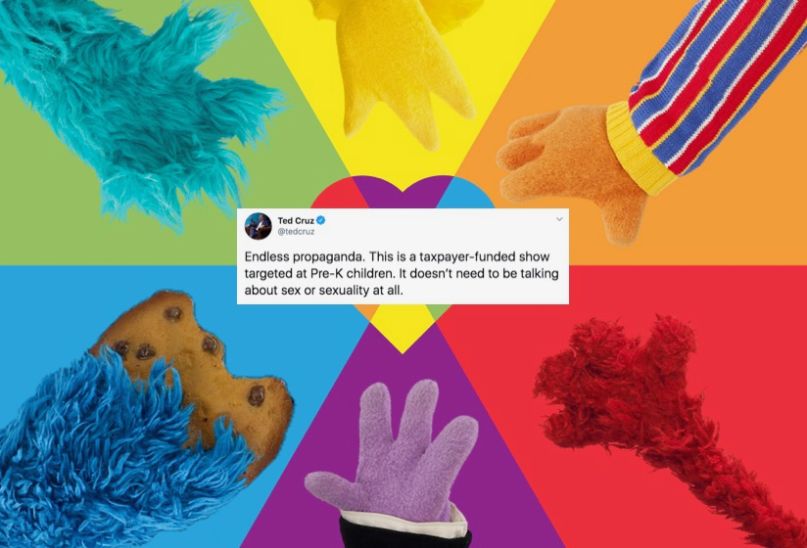 We’re four months into global health crisis, and thousands of Americans are still losing their lives each week. We’re four hundred years into a racism pandemic, and even after numerous viral videos documented the murders of unarmed Black men at the hands of white police officer, the White House’s current occupant is focusing his efforts on protecting statues commemorating a bunch of racist traitors. Yet, today it’s a Sesame Street tweet that has Ted Cruz all hot and bothered.

Just days after challenging Hellboy actor Ron Perlman to a wrestling match, Texas’ junior senator is once again embarrassing himself. Earlier this afternoon, Cruz lashed out against a Sesame Street tweet celebrating Pride, referring to it as “endless propaganda.”

“This is a taxpayer-funded show targeted at pre-K children,” Cruz added. “It doesn’t need to be talking about sex or sexuality at all.”

To be fair, as a massive consumer of pornography, Cruz’s mind is naturally in the gutter. In actuality, Pride isn’t about sex, it’s about acceptance. Maybe if more people of his generation had taken the lessons of Sesame Street to heart while growing up, millions of Americans wouldn’t have to put their own personal health at risk in order to march in the streets to protest societal injustices. Also, it’s pretty ironic for Cruz to bitch about wasting taxpayer money when he himself is a public servant who spends his days on Twitter getting triggered over the most asinine bullshit. Either that or he’s watching porn.

Hilariously enough, Cruz isn’t the only Republican to be triggered by Sesame Street as of late. Earlier this month, FOX News’ chief racist, Tucker Carlson, had an on-screen meltdown after Elmo took part in a video educating children about racism.

Editor’s Note: Celebrate Pride and the power of authenticity with our new rainbow face masks. A portion of the proceeds benefit the Marsha P. Johnson Institute, which protects and defends the rights of Black transgender people.

Endless propaganda. This is a taxpayer-funded show targeted at Pre-K children. It doesn’t need to be talking about sex or sexuality at all. https://t.co/YV3HUB5pCt