"To see someone rocking so great who is so young, it really gives me hope for the future" 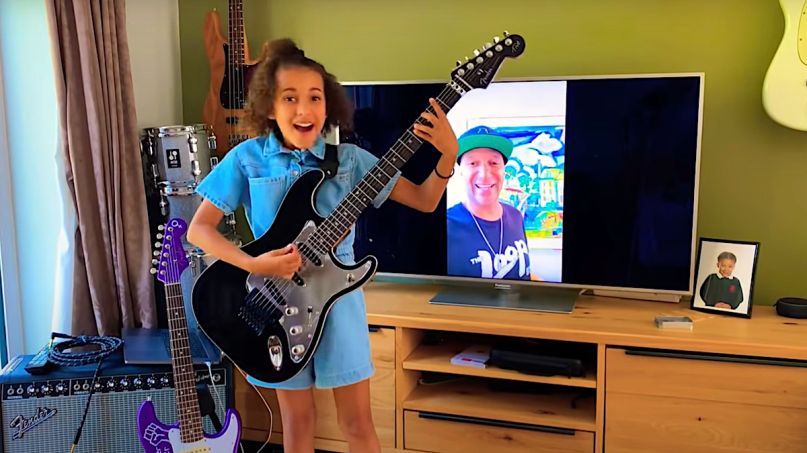 A few weeks ago, 10-year-old Nandi Bushell delivered an impressive cover of the Rage Against the Machine classic “Guerrilla Radio”, in which she played drums, bass, and guitar. Now, RATM’s Tom Morello has gifted the young rocker with his new signature Fender Soul Power Stratocaster.

Nandi has been wowing music fans for a few years now, mostly with her skillful drumming. Her rendition of Nirvana’s “In Bloom” has more than a million views on YouTube, and a recent performance of Queens of the Stone Age’s “No One Knows” got kudos from the band itself. She’s even jammed with Lenny Kravitz and appeared on The Ellen Degeneres Show.

The young musician dedicated her RATM cover to Black Lives Matter and the fight to end racism, and Morello shared the performance on Twitter, writing, “Well now we are on the right track.”

Cut to a couple weeks later, and Nandi was in for a big surprise. A new clip posted on her YouTube channel shows Nandi being surprised at her home in the UK with a video message from Morello. He tells her, “Hey Nandi, I’d like you to have this guitar as a gift from me to you because you rock so great, and to see someone rocking so great who is so young, it really gives me hope for the future.”

The RATM guitarist continues, “I didn’t start playing guitar until I was 17 years old, so you are way, super-far ahead of me, and I look forward to hearing a lot more of your music in the future. You’ve got a lot of soul, and here’s a little Soul Power to go with it. Keep it up!”

Nandi’s reaction is priceless, exclaiming, “Wow, from the actual Tom Morello!” She’s then in for an even bigger surprise when she opens a guitar case and sees the Fender Soul Power Stratocaster.

Morello unveiled his signature Fender Soul Power Stratocaster guitar earlier this year. The model is based on a guitar he used while a member of Audioslave.

As for Rage Against the Machine, the band was set to embark on a highly anticipated reunion tour this year, but the entire trek was postponed due to the COVID-19 pandemic. Most of the dates have already been rescheduled for 2021, with tickets available here.

In the meantime, RATM have seen a huge spike in album sales and streaming amid the ongoing protests, with “Killing in the Name” reaching No. 3 on the Hard Rock Digital Songs chart.

Watch the clip of Nandi receiving the surprise message and guitar from Tom Morello, as well as her performance of “Guerrilla Radio”, below.