That's right, folks: one puppet is feuding with another 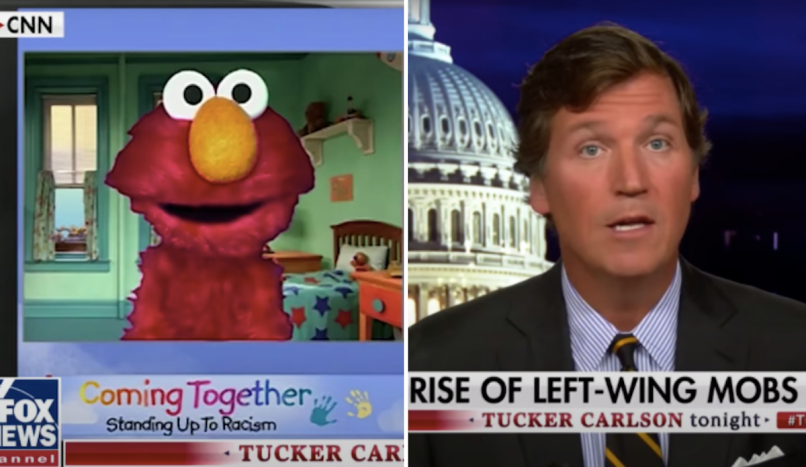 After CNN and Sesame Street held a joint town hall on racism, Fox News anchor Tucker Carlson launched into a deranged rant against the beloved children’s character Elmo. That’s right, folks: one puppet is feuding with another.

These days Elmo is primarily voiced by Ryan Dillon, while Carlson has Rupert Murdoch’s hand up his ass. You wouldn’t think they’d be natural enemies, but Carlson, who last year called white supremacy a “hoax,” sees any attempt to talk about racism as an attack on his own (fanatically prejudice) brand.

“The country’s defenses have been badly weakened by decades of relentless propaganda,” he bloviated on his June 9th show. “All of it designed to make us feel that we have no right to stand up for ourselves, to stand up for our country.” And of course, the man who once claimed that immigrants would make the US “poorer and dirtier,” knows a thing or two about propaganda. Here, he took issue with was a conversation between the character Elmo and his father Louie about Black Lives Matter protesters.

“Are the protesters sad?” Elmo wanted to know. “They are sad and upset,” Louie replied. “And they have every right to be, Elmo.” He added that, “Across the country, people of color ― especially in the black community ― are being treated unfairly because of how they look.” At one point, Louie held up a sign that says “Love Justice Peace”.

The message seems simple — too simple, if you ask Carlson. So he did his viewers the questionable service of translating those words into Fox-approved truthiness. Addressing a fictional child, Carlson said,

“Got that Bobby? America is a very bad place, and it’s your fault. So no matter what happens, no matter what they do to you when you grow up, you have no right to complain. That’s the message and it starts very young.”

Of course, this writer might point out that the message was actually ‘speak up to promote tolerance,’ but then, I watched Sesame Street as a child, so my brain is already addled with crazy ideas about love and mutual respect.

Both puppets are moving up in the world. Anchored by Tucker Carlson and Sean Hannity, Fox News ended 2019 with its highest prime time ratings ever. Meanwhile, Elmo is now the host of The Not-Too-Late Show with Elmo on HBO Max. So far he’s waded into other topics that Carlson may find controversial, including the importance of bathing and brushing your teeth.