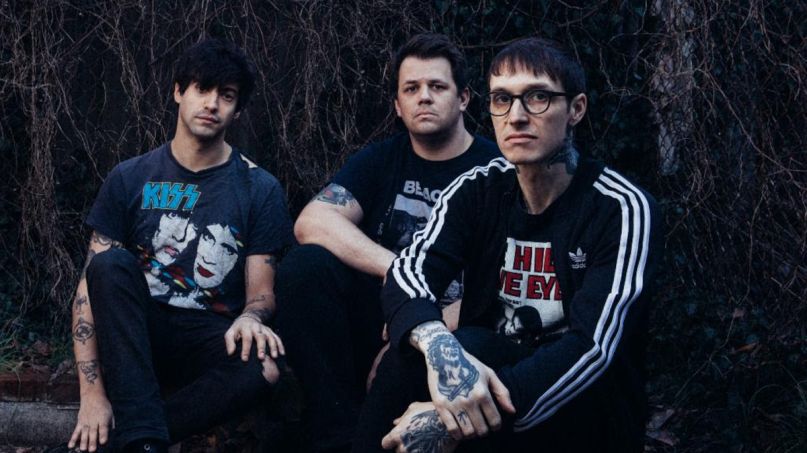 Shame, which arrives September 11th via Sacred Bones, follows a prolific string of work from the Brooklyn harshers. The band collaborated with The Body on 2019’s Everything That Dies Someday Comes Back and garnered praise for their 2018 effort, The Long Walk.

Blending elements of industrial, drone, and power electronics, the band unleash brutal landscapes and oppressive moods. “Delco” showcases the sound Uniform have been perfecting during the past few years of gigging around NYC and Brooklyn, playing shows at notable heavy music venues such as Saint Vitus Bar and opening up for Deafheaven at Brooklyn Steel.

The torments of “Delco” — short for “Delaware County” in west Pennsylvania — stem from vocalist Michael Berdan’s suburban upbringing and his violent encounters with the neighborhood bullies. Berdan sounds like he’s unleashing years of pent up frustration on the track.

“During my adolescence I would get routinely picked on and beat up by some of the kids in the neighborhood who I desperately wanted to like me,” Berdan said in a press release. “The more beatings I caught, the more I’d go back to try and impress them. My self esteem was nonexistent and I developed psychological calluses. I learned to repeat some of the behaviors that had been leveled my way on those beneath me in the pecking order. In time, I became numb.”

He added, “Getting older and attempting to reconcile with personal demons surrounding depression, anxiety and substance abuse has forced me to take a long, hard look at my childhood. In the process I’ve realized to degrees just how I’ve perpetuated learned cycles of harm. A terrified part of me is still a little kid in Delco. This song is an exercise in trying to come to terms with these ghosts and let go. Some days are better than others.”

Similar themes of reflection and lyrical inner-dialogue run through Shame, which Berdan compares to the classic paperback novels he was reading during the making of the album.

“Thematically, the album is like a classic hard-boiled paperback novel without a case,” Berdan said. “It focuses on the static state of an antihero as he mulls over his life in the interim between major events, just existing in the world. At the time we were making the record, I was reading books by Raymond Chandler, James Ellroy, and Dashiell Hammet and strangely found myself identifying with the internal dialogues of characters like Sam Spade and Philip Marlowe.”

“I wanted my words to carry a degree of weight on this record,” he added. “Books and cinema have always been integral to my life, and that is often because of how I relate to the themes and characters therein. I am naturally shy and terrified of being misunderstood. This time around, I endeavored to trudge through those fears in order to explicitly articulate what goes on in a dreary corner of my inner life.”

The LP features the debut of Mike Sharp on drums, with guitarist Ben Greenberg producing the album at his Strange Weather studio. The record was mixed by Randall Dunn.

Pre-order Shame via Sacred Bones or Amazon. Stream “Delco” and check out the album art and tracklist below.