The latest preview of her upcoming album, Such Pretty Forks in the Road 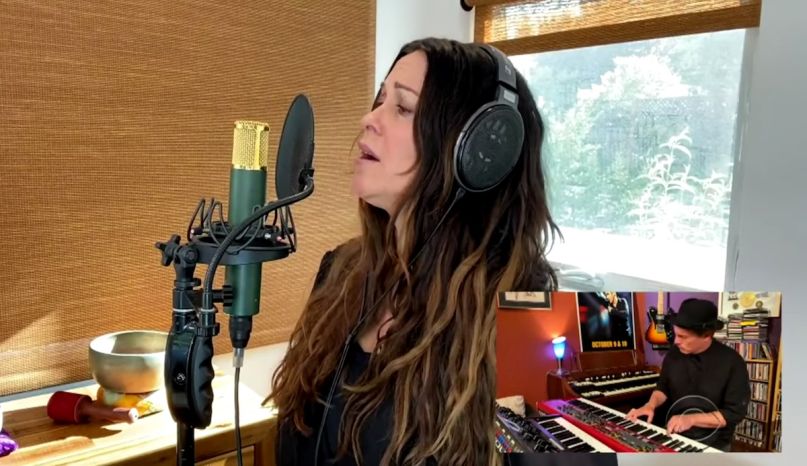 After a minor delay due to the pandemic, Alanis Morissette is finally set to release her first album in eight years later this summer. In the lead-up to Such Pretty Forks in the Road, she delivered the TV debut performance of “Diagnosis” on James Corden on Thursday.

Practicing social distancing, the veteran singer-songwriter broadcast from her own home, specifically what appeared to be a meditation room with a singing bowl. Morissette was accompanied by a pianist, who also performed from his respective quarantine space.

Released in April, “Diagnosis” deals with the stigma surrounding mental illness. Although written prior to COVID-19, lyrics like “I’ve not left the house in a while/ I’ve not felt a glimpse of ease” feel chillingly apt given everything happening now.

Elsewhere during her Late Late Show appearance, Morissette told Corden about her experience homeschooling her nine-year-old son amidst the outbreak — or “unschooling”, as she called it. “It’s probably open to interpretation. I think everyone does it a little differently but unschooling is very child-led, not in that very charged, age-inappropriate way, but more that their tendencies, their creativities and their curiosities aren’t squashed,” she explained.

“It’s making sure that there’s some physical, some social interactive way of going within and helping your children navigate the inner landscape and of their feelings and their thoughts.”

Such Pretty Forks in the Road arrives July 31st and pre-orders are ongoing. In light of the health crisis, Morissette was recently forced to postpone her Jagged Little Pill 25th anniversary tour.