Alanis Morissette’s Such Pretty Forks in the Road Shines Light into the Depths: Review 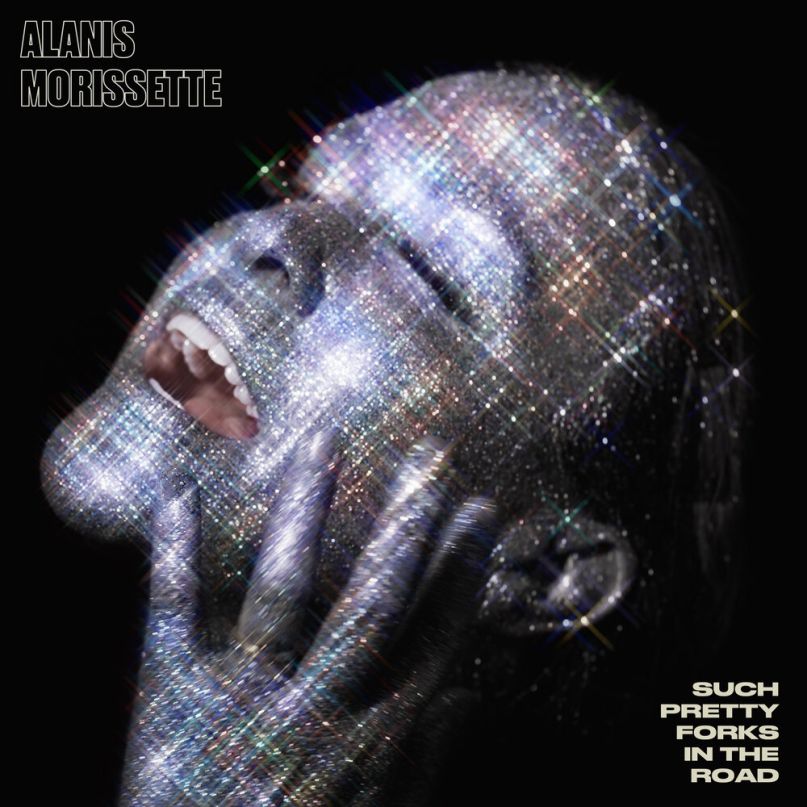 The Lowdown: Alanis Morissette is back! After an eight-year hiatus, one of the ’90s pinnacle pioneers of alt rock is sweeping back into the spotlight with her ninth studio album, Such Pretty Forks in the Road. After four years of work and a three-month delayed release due to COVID-19, the album applies a trademark Morissette treatment — cutting lyrics and a voice that howls and croons and whispers as deftly as an arrow — to questions of adulthood, responsibility, and creativity to greater and more complete effect than what we’d last seen from her. The resulting album is extremely haunting, immaculately polished, and complexly kind.

The Good: Such Pretty Forks in the Road finds Morissette exploring the tenuousness of fame, youth, and passion but in a way that thwarts that tenuousness in its tracks. At the risk of steering too close to an “Ironic” pun, one of her strengths has always been her embrace of contradiction and the friction that lives there. On the one hand, she’s unafraid of finding her own sound and using her raging, expressive voice to carve out her own definitions of grace and seems to have no qualms about vulnerability; think the raw, personal pain she shares in “You Oughta Know” or her literal nakedness in the music video for “Thank U”. Yet, on the other hand, her lyrics, particularly on this album, are betraying her insecurities and questioning them at every turn.

Her way with words hasn’t gone anywhere, and in this album she pairs it with enveloping production and mature rock instrumentals. Her energy feels more concentrated than we’ve seen in years, between the contemplative Havoc and Bright Lights and the ignited, exploratory heartbreak of Flavors of Entanglement. True, the new record may not have the persistent electricity of songs like “Citizen of the Planet” and “Straitjacket,” but it finds its energy in deeper, more detailed grooves. There’s the guitar, which in “Sandbox Love” sounds like the glittering wheels driving a classic rock song, and “Smiling” carries a mysterious, probing tinge that almost resembles a Twin Peaks theme. “Reasons I Drink” has a Fiona Apple-type verve to it, and “Reckoning” brings a sweeping sheath of rhythm, guided along by soft, percussive piano and later a waltz-like union of drums and guitar.

Halfway through the album, “Losing the Plot” digs inspiration from fear and offers another high point: snares and cymbals drive an introspective moment that finds Morissette “grieving the end of Superwoman-ing” but affirming that her “mission is not dead yet.” She finds one possible antidote to this prospect in “Her”, an ode of feminine divinity beckoning Morissette “to braver inquiry”.

Outside of “Reasons I Drink”, there’s little of the unshakeable catchiness of some of Morissette’s most beloved melodies, which may strike some as a low point. But catchiness doesn’t feel like the most useful metric for judging this album, because it doesn’t feel like that’s the type of music she’s striving for here. On “Nemesis”, she sings, “Change you are my nemesis/ Transition I hold my breath,” and later, “Now I am beyond recognition/ I guess that’s a good thing/ And still I want to go deeper.” As a self-proclaimed “notorious bottom-dweller,” she’s not rueful; she’s probing the depths beneath her and finding glimmers.

The Bad: All the songs here are pretty much worth their salt, but there are a few lyrical moments where the complexity and contradictions feel a little boiled-down. “Missing the Miracle” illustrates its irony beautifully with crisp lines like, “I go for the jugular/ You knock ’til you get in,” but doesn’t do much in its lyrics or its even-paced melody to push through this back-and-forth into the deeper meaning of the “miracle” beneath. It bears some kinship to the writing in “Hand in My Pocket,” but without quite as strong a dose of what it all comes down to. Elsewhere, “Sandbox Love” brings some needed sunniness and features some of the best opening lyrics on the album (“Catapult me out/ Of this fantasy/ It’s never been mine/ It’s always been yours”), but its resolution feels like it belies some of the more layered work the album is doing. Maybe because the chorus celebrates a love that is “Awkward as fuck/ Sexy as fuck/ Sacred as fuck,” something about it still feels just a fraction too nice and clean.

The Verdict: With the shadow of an album like Jagged Little Pill so actively following her — with its new Broadway production debuting last year, its 25th Anniversary Deluxe Edition released this year and an anniversary tour scheduled for 2021, not to mention its legacy of record-breaking sales and tracks lodged in the hearts of a generation — finding redefinition through new music is a daunting challenge. Such Pretty Forks in the Road does a clearer job than some of its 2000s-era predecessors of not sounding like it’s straining to follow something up or to prove that there are still tricks Morissette can pluck from her sleeves. And it’s this focus that ultimately makes it compelling.

The music video for “Reasons I Drink” features some of the many faces of Alanis Morissette — the star signing autographs and giving interviews, the harried mother breastfeeding, the Alanis in the striped scarf and knit cap from her “Ironic” music video — and all of them are communing together in group therapy. It feels like more confirmation than anything that despite her nineties notoriety and all our collective associations with it, there’s no side to her that’s truer than the others; like with all of us, there’s only a set of experiences, and an innate voice she seeks to channel in her work to communicate the essence of what those experiences feel like. In Such Pretty Forks in the Road, she chooses a new engine of experiences from her life to power that voice — taking on patriarchy, postpartum depression, addiction, and mental health — and channels it again.

Essential Tracks: “Reasons I Drink”, “Losing the Plot”, and “Reckoning”

Pick up tickets here to Alanis Morissette’s tour with Garbage and Liz Phair.

Listen to Such Pretty Forks in the Road in high-fidelity or Masters quality with a 60-day free trial of TIDAL HiFi.