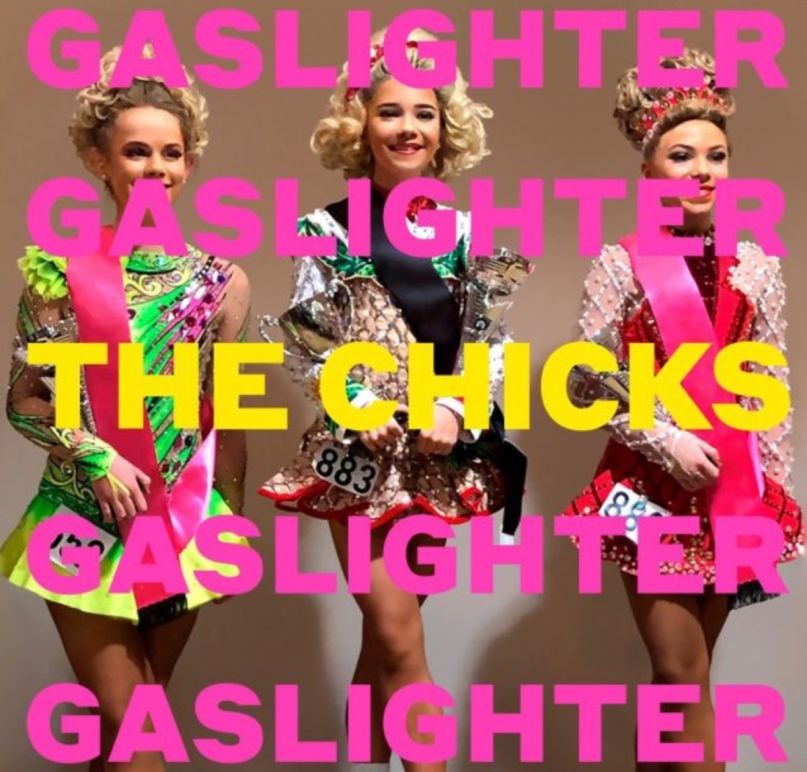 The Lowdown: The most infamous act in country music, The Chicks (formerly known as the Dixie Chicks), stopped releasing new music 14 years ago, after their seventh album, Taking the Long Way, netted five Grammys. These included Album of the Year, plus Record of the Year and Song of the Year for “Not Ready to Make Nice”, which settled any lingering questions about whether they regretted their 2003 criticism of George W. Bush (they did not).

Gaslighter marks the trio’s official return, and a lot has changed, both in the surrounding world and in the sound of The Chicks’ music. But some crucial elements remain the same: their attention is firmly focused ahead of them and on the things they care for. In the songs that focus on deteriorating relationships, and notably lead singer Natalie Maines’ divorce from Adrian Pasdar, that care takes the form of scathing blame, betrayal, and forthright disbelief; elsewhere, they focus their lens on a country that has severely neglected its direst problems, including gun violence and climate change, and on the children they want to do right by. The album bears some natural similarities to Taylor Swift’s Lover from last year, not only because they share Jack Antonoff as a producer — which you can hear, in the way the songs are built out from their interiors, in the lushness of sound that ebbs and flows between particular tracks — but also because it asserts a pop sound of its own. The journey of Gaslighter is bolstered by the same strong group dynamic that put The Chicks on the map years ago, all through a lush but often dialed-back, new sound that ventures further into the pop realm.

The Good: “Gaslighter” cracks the album open with the three Chicks shouting in unison. In a lot of ways, the opening track sets the stage for what follows: It channels anger and accusation into an addictive pop anthem of victory, relief, and the kind of electrifying empowerment that comes from putting the truth into words. “Gaslighter” is a breakup song, but this isn’t a breakup album. A lot of “breakup albums” culminate in a song that involves some sense of moving on; the weight of Gaslighter falls in and after that final space, in unraveling what “moving on” actually looks like. In this case, it looks like 12 tracks of poetic lyrics, top-tier harmonies, and an unapologetically evolved sound. It looks like anger and betrayal, but also relief, exuberance, rebounds, messiness, self-control in the face of fear and confusion, and, most crucially, re-orientation into things bigger than yourself.

There are so many different builds to these songs. The marching-band surety of “Gaslighter” and the stressed violins of “March March” do the clearest jobs of announcing themselves. But the gradually enveloping harmonies of tracks like “My Best Friend’s Wedding” are notable, too, as are the catchy, even-keeled “Texas Man” and the snappy, hypnotic reassurance of revenge that comes in the stripped-back “Tights on My Boat”. The Chicks manage them all expertly, particularly on the vocal front. Some of the most pulled-back, folk-infused laments — “Everybody Loves You” and “Hope It’s Something Good” — are where Maines’ vocals shine the brightest, allowing their natural tremor and soft edges to surface, from the near-defeated dip of the line, “Why does everybody love you,” to the disbelief of “Twenty years of hanging on/ Now it all adds up to nothing.”

The management of tone throughout is also masterful and consistent. For all the shifting that occurs within individual songs, it’s always anchored to place by restrained instrumentation and artful, deliberate counterpoints between highs and lows. On “For Her”, the verses feel relatively muted and pulled back, until the chorus — beginning with the instructions, “So dig a little bit deeper/ And be a little bit kinder” — begins vaulting upward. This cascade up spirals into a new form halfway through the song, with the bridge climbing in pitch and in layers through the repeated commands, “Stand up, show love for her, for her.” Another powerful use of the mirroring of tones surfaces toward the end of “Julianna Calm Down” when just as the final list of names and entreatments is about to reach a boiling point, the return to “Julianna, calm down,” brings things back down to the even tone of the beginning (calming the song itself down!).

But the best example is in “March March”. The track stays low to the ground and grave, especially Maines’ vocals, for most of the song — but then the instrumental takes over, the striving and mourning violin. These two tones coalesce perfectly to capture the internal warfare of grief, the delicate push and pull between profound sadness and righteous, strenuous rage. And it does all of this over a clapping beat that sounds like a marching drum, like a call to action — which is what it is.

The Bad: There are no filler tracks on Gaslighter, but tonally, the galvanizing nature of the album does lose a little steam toward the very end. There’s no reason an album should have to provide a certain number of anthems or uptempo, sing-along-worthy tracks; it’s just that, after hearing a firework of a song like “Gaslighter” and a catchy rebound jam like “Texas Man”, it’s hard not to at least want a little more as things are winding down. The pop elements of this album could also potentially bemuse some of the country purists among their fans, because it is a different sound than the country ballads, anthems, and laments of their earlier days. But this hardly counts as a flaw, and anyway, The Chicks have already proven themselves more than resilient to the blame and projections of fans who resent them.

The Verdict: For The Chicks, the personal and the political have long been pretty much inseparable, and it’s clear on this album that they take history personally — as we all should. There are multiple songs addressing and counseling their children — “Julianna Calm Down”, which folds a net of feeling into a shoe-tapping quilt where gravity and jubilation meet seamlessly, and “Young Man”, a soft, acoustic balm that Annie Clark helped co-write, which recalls the sound of classic songs like “A Home”. These are tracks where The Chicks’ care for their children feels tangible, where all of the frustrations, joys, and trust inherent in helping and witnessing one’s children form their own visions of the world are felt in the ups and downs and the rhythms of the music.

The Chicks’ 14-year hiatus was largely due to parenting, and in many ways, Gaslighter is a parenting album. That is to say, it’s music that wants to reassure us and untangle our conflicts for us, but understands also the evil and reckless corners of the world. It knows that there are battles we will have to inherit or learn to wage completely on our own, and it tries also to arm us for these. There are some enemies in the world who will never give us peace on their own, not even if we prompt or entreat them, not even if they once loved or claimed to love us. This could be true of an ex-husband, or it could be true of a government. The album doesn’t pretend to resolve these conflicts, because they are ongoing in our lives. When a wound is still there, it’s still there. But it does give voice to them, which feels like the whole point.

Essential Tracks: “Gaslighter”, “For Her”, and “Julianna Calm Down”

Pick up a copy of Gaslighter here.

For a high-definition listening experience, you can sign up for a 60-day free trial of TIDAL HiFi.