The Pretenders’ Hate for Sale Showcases the Band’s Versatility: Review 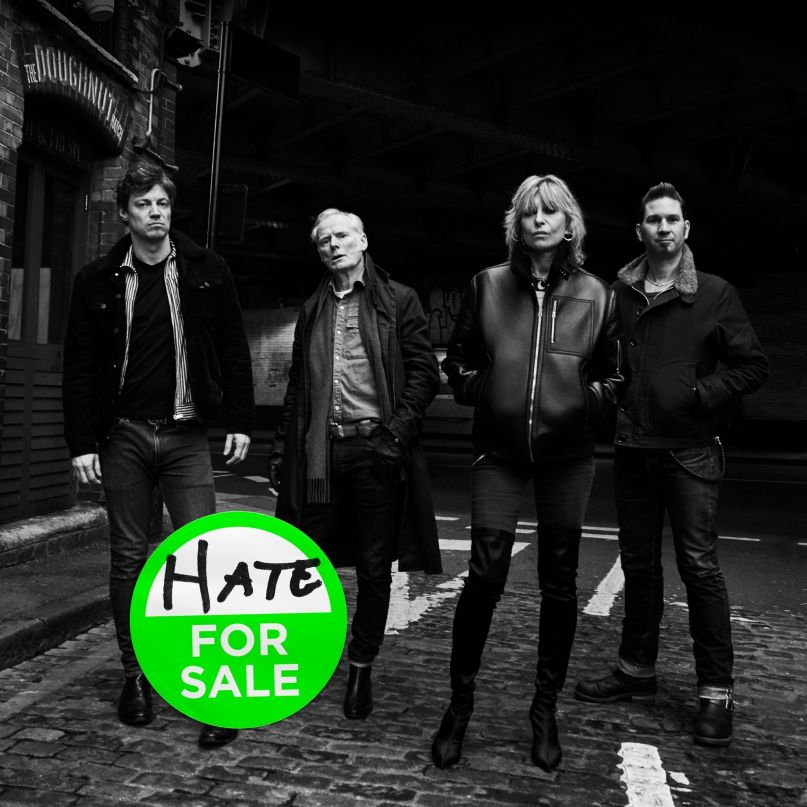 The Lowdown: Well, here’s one good thing to come out of 2020 thus far: The Pretenders are back with a brand-new album after four years. After beginning to capture global attention for their new wave sound back in the late ’70s — something that felt musically distinctive given that they rose through the ranks in London alongside punk upstarts like The Clash and Sex Pistols — the band began to take a firmer pivot into rock on their most recently released record, Alone. Hate for Sale sees The Pretenders continue to travel down that path and successfully so. Pulling off a sonic switch-up decades into a decorated career isn’t an easy feat, but The Pretenders manage to do it seamlessly. Frontwoman Chrissie Hynde’s vocal performance maintains its longstanding sense of faculty, and their lyrics remain a fascinating elixir of openhearted-ness and fearlessness — the only difference, however, is that these elements are now featured against the backdrop of snarling guitars and rumbling drums. Yet, this is not always the case, as the band throw in many a stylistic curveball throughout the course of the album. No matter the style or sound at hand, though, the work remains strong and showcases the breath of The Pretenders’ versatility as artists.

The Good: The Pretenders have long established their ability to blur the lines between the raw and the refined, allowing vulnerability and an impenetrable sense of cool to exist harmoniously. Hate for Sale encompasses this to a maximum extent, with ballads about the stigma women face surrounding emotional expression (“Crying in Public”) co-existing with guitar fueled, razor-sharp pannings of shady characters (“Hate for Sale”, “Turf Accountant Daddy”). What makes this duality notable is that there is no loss of gusto in either case. The sense of openness, the ability to execute an unfiltered translation from the internal thought to external expression, is just as powerful as the tracks that are coated in big chords and a keen edge. The many forms sonic prowess takes on Hate for Sale — whether it be in a ska influence (“Lightning Man”), a buzzy guitar riff (“Junkie Walk”), or reflective ruminations (“You Can’t Hurt a Fool”) — make it a multidimensional and enjoyable listen.


Hate for Sale also presents what is arguably one of Hynde’s finest vocal performances. She sings each word as if it were a standalone performance itself, infusing them with a slick sense of flair. While this is the case on each track, a standout performance worth mentioning occurs on “The Buzz”. Serving up a more stripped back score in comparison to a majority of Hate for Sale’s tracks, Hynde’s voice takes center stage. She croons her way through the track like a hot knife through butter, peppering each line with panache. This results in each line being sung with its own rising and falling action — much like a good story. Whether it be the way words seamlessly transition from being sung softly to boldly drawled out, or the way that this change in inflection matches up with those within the music, there’s something about Hynde’s vocal style that really sticks with the ear.

The Bad: As strong as Hate for Sale is, it often feels like it’s teetering on the precipice of explosion. In the words of the infamous adage from This Is Spinal Tap, each track feels like it has the capability of being “turned up to eleven,” but the dial stopped turning at a seven or an eight instead. Like ordering something delicious at a restaurant and having it turn out to be of a disappointingly small portion size, the tracks on Hate for Sale are well done enough to the point where the listener could be left wanting just a little more out of them.

For example, the title track presents a brilliant lyrical smackdown of the kind of guy who behaves like he’s on top of the world when, in reality, he’s dangerously blinded by privilege (a particularly electric lyric is “Money in the bank and coke in his pocket/ Porn all day, wanks like a rocket”). Especially as the opening track on the album, it sets a precedent for a level of sting and burn that could be emulated elsewhere to the same degree, particularly on other more rock-driven tracks like “Turf Accountant Daddy” and “Junkie Walk”. While still both strong in their own right, there’s a bit less bite in the lyrics that makes them feel like gentler versions of what could have been. The fire was quelled when there was an opportunity to fan the flames instead.

The Verdict: Hate for Sale is a museum that puts all of The Pretenders’ best attributes on full display. The ability to successfully engage with a number of different styles and tones, pen lyrics that are both incredibly vulnerable and smartly robust, and frame it all within their own unique zeal makes Hate for Sale a worthy and welcome addition into the band’s historic discography.

Pre-order Hate for Sale here, or pick it up here.