The duo play "The Suburbs", "Haiti", and "Sprawl II (Mountain Beyond Mountains)" from New Orleans 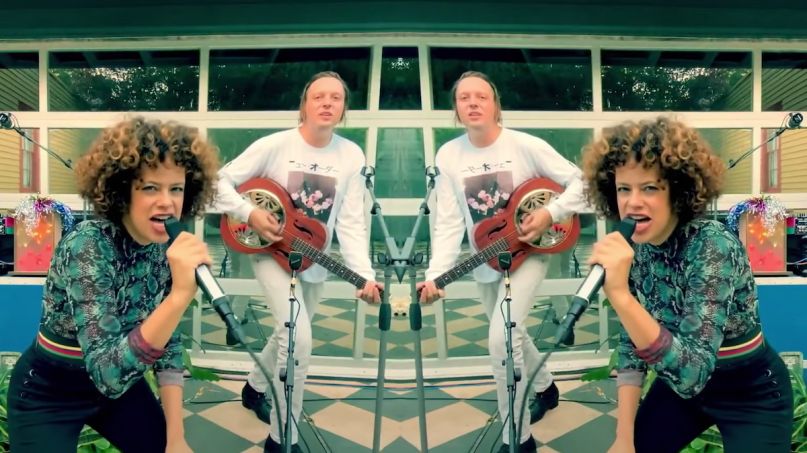 Arcade Fire performed their first concert in two years back in February — and then the pandemic hit, and we haven’t heard much from the indie favorites since. Footage from that show aired during Preservation Hall Jazz Band’s ‘Round Midnight Preserves livestream benefit last month, for which Win Butler was also on hand, but that’s about it. Fans finally got more of that ol’ AF magic on Thursday when Butler and Régine Chassagne gave a three-song performance during a Salesforce-sponsored livestreaming event.

The “Speaking Out, Making Change” stream was focused on how organizations use storytelling to inspire change. Chassagne was there to discuss her KANPE foundation and its work supporting vulnerable communities in Haiti. After a brief interview, she was joined by Butler for to sing three classic AF songs.

Playing from a checkered courtyard in New Orleans, the duo opened with an acoustic version of “The Suburbs”, shot in black-and-white. While Chassagne stayed on her guitar, Butler moved to his DJ Windows 98 setup for a mirrored and subtitled rendition of “Haiti”. The short set closed with the pair bouncing around the square to sing “Sprawl II (Mountain Beyond Mountains)”. It may have been a micro version of Arcade Fire, but Chassagne’s energy alone made it feel like the band was really back.

Replay the full livestream below (Arcade Fire’s appearance begins around the 39:30 mark).

While this is the first we’ve heard from Arcade Fire in some time, it won’t be the last. Back in April, Butler teased that the band was working on a new record, a follow-up to 2017’s Everything Now. What’s more, both the band’s Jeremy Gara and Will Butler announced solo albums earlier this month, with the former’s coming September 11th and the latter’s arriving September 25th.

You’ll also be able to watch a full Arcade Fire set when their 2010 Lollapalooza performance airs in full as part of the festival’s livestream event this weekend. Tune in Sunday, August 2nd at 9:35 p.m. CT to check it out.