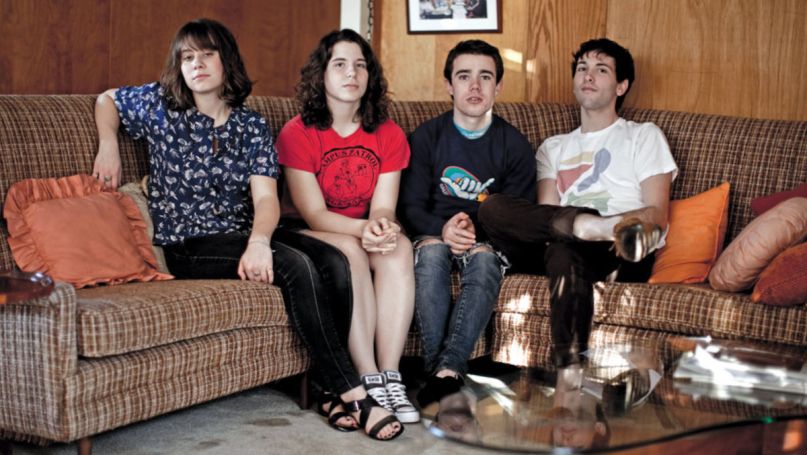 Rebecca Coleman has accused her former bandmate Avi Buffalo, a.k.a. Avi Zahner-Isenberg, of multiple incidents of rape, as well as a pattern of emotional abuse and harassment.

In a lengthy Instagram post, Coleman (above far left) explained how she met Zahner-Isenberg (second from right) in high school. She said he quickly and vigorously began pursuing her, despite the fact that she was dating Devin O’Brien (her current partner and bandmate in Pageants) at the time and eventually began seeing another individual.

In 2006, Coleman joined Avi Buffalo, and Zahner-Isenberg continued to aggressively court her. When she finally agreed to date him in 2008, he began a pattern of cheating on and breaking up with Coleman, as well as emotionally abusing her by belittling her and questioning her musicianship. “I don’t even know how long we were truly together since he had broken it off so many times,” she wrote. Coleman eventually removed herself from the “toxic relationship” and began exploring renewed feelings for O’Brien.

The first alleged rape occurred on April 22nd, 2009. Zahner-Isenberg told Coleman to come to his house to take photos for a feature in the Los Angeles Times; he also invited O’Brien to the shoot. Coleman arrived ahead of O’Brien, at which point Zahner-Isenberg “immediately began undressing me,” Coleman recalled. Though shocked and initially saying “no,” she consented to “fool around with him but made it very clear that we were not going to have sex.” Zahner-Isenberg allegedly ignored that agreement and penetrated Coleman. After hearing O’Brien arrive, Coleman again begged Zahner-Isenberg to stop, but he allegedly held his hand over her mouth and continued raping her. He then made her leave through the bathroom window and come around to the front again, claiming she was on the phone outside.

After school the following day, Coleman crossed paths with Zahner-Isenberg on the way to her car. “I tried to walk past him but he grabbed me and said ‘I know, I raped you and stuff, I’m sorry,'” she recounted him saying.

Shortly after, Avi Buffalo signed to Sub Pop and went on tour with Beach House. Zahner-Isenberg continued strengthening his “hold and manipulation over” Coleman. During one stop, on the tour, Coleman learned she’d be staying at Zahner-Isenberg’s sister’s place with him, while the rest of the band was elsewhere. They ended up having sex, during which Coleman says Zahner-Isenberg anally raped her. “I wanted to scream but we were in his sister’s apartment so I held back while tears ran down my face,” Coleman wrote. “I asked him what he thought he was doing and he said something to the effect of, ‘Sorry, I thought that’s what you wanted.”

When O’Brien joined Avi Buffalo as rhythm guitarist and tour manager, he and Coleman entered into a series relationship. During this time, Zahner-Isenberg would sexually harass the both of them, even sleeping outside their bedroom door. Coleman said she’d often be kept awake at night while Zahner-Isenberg typed on his laptop “talking to an underage fan back home in Long Beach.”

Coleman left Avi Buffalo in 2010 and broke off contact with Zahner-Isenberg. She said she was made to sign an NDA, and while she doesn’t “know if this contract still stands… I do not give a fuck. Time’s Up.”

Coleman ended her post by noting that there were at least two other accusations of sexual abuse against Zahner-Isenberg, but did not provide specifics. The Avi Buffalo frontman himself has yet to comment on the allegations.

Read Coleman’s full post ahead. It ends with a video of Coleman performing a song called “Night and Sun” for KXLU in 2009. The song opens with the lines, “I hate to say, I’m struggling with what felt like rape;” both Zahner-Isenberg and O’Brien were present as the recording. “Avi was pissed I played this song,” Coleman concluded.

Avi Buffalo officially split in 2015. Accusations against Zahner-Isenberg come as a fresh wave of abuse and misconduct allegations are hitting independent music scenes. Burger Records shut down after numerous label members and associated bands (SWMRS, The Growlers, The Buttertones, and others) were accused of rampant misconduct. Nobunny and Culture Abuse also ended their careers in light of similar claims.