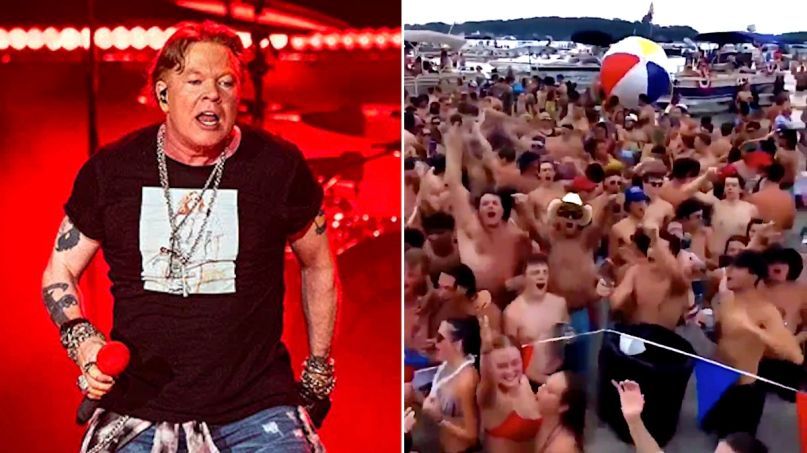 Throughout the COVID-19 pandemic, Axl Rose has been one of the staunchest proponents of social distancing, even getting into Twitter spats with government officials who’ve seemingly downplayed the protective practice. Now, the singer’s worst nightmare has manifested itself: a sea of unmasked revelers dancing to the Guns N’ Roses hit “Sweet Child O’ Mine” at a Fourth of July lake party in Michigan.

In recent weeks, Rose has ripped into Sen. Rand Paul, Secretary of the Treasury Steve Mnuchin, and Surgeon General Jerome Adams after each made statements that seemed to contradict recommendations by the CDC and health leaders to practice social distancing. Mnuchin and Adams even replied to Rose’s tweets, leading to the GN’R singer further condemning their comments.

Mnuchin was dubbed an “asshole” by Rose after the Treasury Secretary blurted out, “This is a great time for people to explore America” in early May while explaining that international travel will be on hold for the foreseeable future. And the GN’R singer said Adams should resign after the Surgeon General refused to say that Americans should avoid large gatherings on the Fourth of July.

A new video that has made the rounds on social media and on television over the past couple days shows hundreds of partiers acting like coronavirus never existed during a massive Fourth of July party at Diamond Lake in Cass County, Michigan. Former NBA player turned social media star Rex Chapman shared the clip on his popular Twitter channel, calling the scene a “COVID-19 Petri dish”, and it now has more than 10 million views.

Music aside, the scene must be enough to make Axl’s blood boil, but adding in the fact that the partygoers are dancing and singing along to “Sweet Child O’ Mine” is like a double slap in the face to the Guns N’ Roses singer. Axl was known to jump into the audience to confront combative concertgoers back in the day, and one can only imagine the havoc he would wreak on the Diamond Lake carousers. Of course, he’d be masked in this scenario.

If it weren’t for the pandemic, Axl would currently be singing the Appetite for Destruction classic on a summer North American tour with Guns N’ Roses. The band plans to make up the postponed outing in 2021, but has not revealed a new itinerary yet.

See Axl’s nightmare come true in the Twitter clip below.