A Transport of London representative said, "It was treated like any other graffiti on the network" 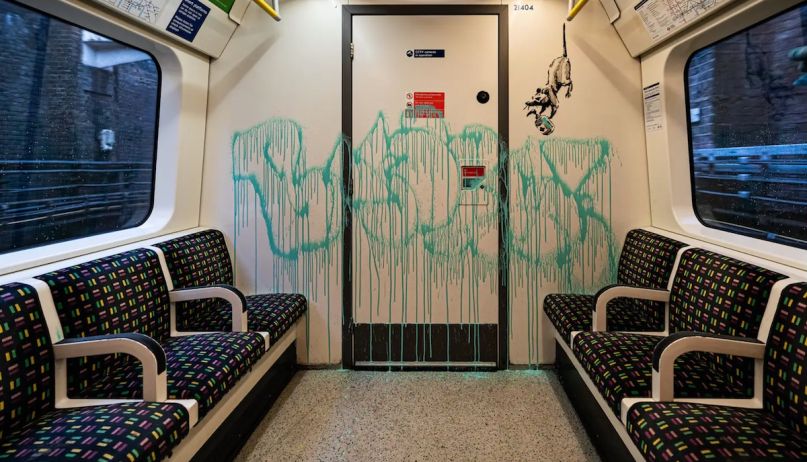 On Tuesday, the enigmatic British street artist Banksy unveiled his latest public work. Entitled “if you don’t mask — you don’t get” and laid out inside a London train car, the piece brought together his classic rat motif and the lyrics of Chumbawamba to make a statement about staying protected in the era of COVID-19. Art fans hoping to check out the Underground graffiti for themselves are out of luck, however, as Transport for London cleaners scrubbed the spray paint away before Banksy even announced it.

An official statement from TFL said the work was cleaned off “some days ago,” in following the Underground’s “strict anti-graffiti policy.” Apparently, the workers were “unaware” the black-and-teal paint on the Circle Line carriage was left by the artist, and thus “it was treated like any other graffiti on the network.”

“The job of the cleaners is to make sure the network is clean, especially given the current climate,” a TFL representative told the BBC.

It’s actually probably a good thing that the Underground workers are vigilantly doing their jobs keeping the Tube clean, especially given the current health crisis. It also seems likely Banksy, who isn’t one to shy away from creating temporary art, knew the work wasn’t going to last long.

That said, the TFL supports “the sentiment of encouraging people” to wear masks, and offered Banksy “the chance to do a new version of his message for our customers in a suitable location.”

For what’s likely the only remaining look at “if you don’t mask — you don’t get” on the London Underground, watch Banksy’s original reveal video below.