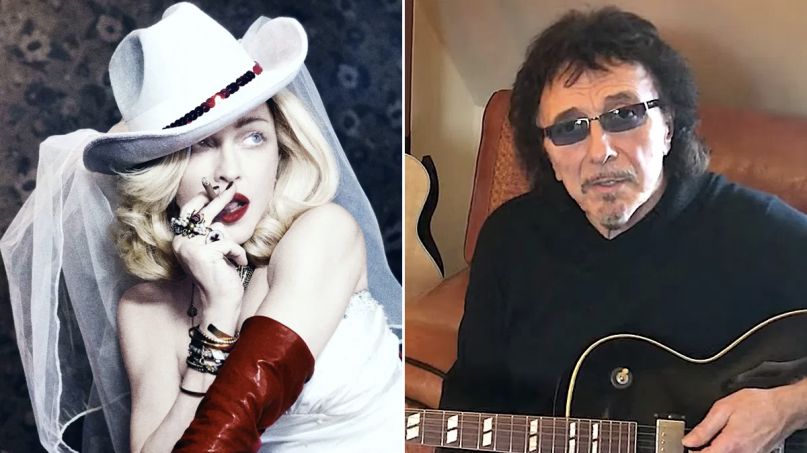 In a new interview, guitarist Tony Iommi recalled the original Black Sabbath lineup’s brief reunion in 1985 for Live Aid, where Iommi inadvertently crossed paths with pop star Madonna, unbeknownst to him at the time.

Live Aid saw Iommi, Ozzy Osbourne, Geezer Butler, and Bill Ward onstage together for the first time in years. The day before the performance, the band was given a private room for rehearsal. Black Sabbath were jamming and reminiscing about the past when Iommi noticed two people enter the otherwise closed session.

“It was a bit of a disaster, really, to be honest,” Iommi told SiriusXM. “They had a room booked for us to rehearse. We started rehearsing and then we started talking about the old times; so most of the rehearsal was talking. And the time when we did rehearse, it was a closed session, and it would be embarrassing really because I saw these two girls come in at the back of the room.

He continued, “And I said to one of our crew, ‘Look, there’s people walking in,’ you know, ‘You better tell them to get out, this is a private rehearsal.’ Anyway, he goes up and tells them, and it turns out to be Madonna. So, it’s a bit embarrassing.”

Iommi and the rest of the band then headed back to the hotel and drank off the encounter at the bar, hanging out with fellow British metal legends Judas Priest, also on the Live Aid bill.

“On the night before the show, we went back to the hotel and of course, we all ended up in the bar, and that was another disaster because we had a bit too many to drink,” Iommi said. “And then the next day, of course, I had a dreadful hangover when we were on stage. I mean, we didn’t expect to be going on that early but, of course, we did. And it was — as I said, I didn’t feel exactly on top of the world and I don’t think any of us did.

“We sat in the bar with Judas Priest for ages because we hadn’t seen them for a while and it was like, you know, everybody talking about the old times and all the things because we’re both from the same town.”