Mel Gibson’s Force of Nature Drowns While Trying to Own the Libs: Review 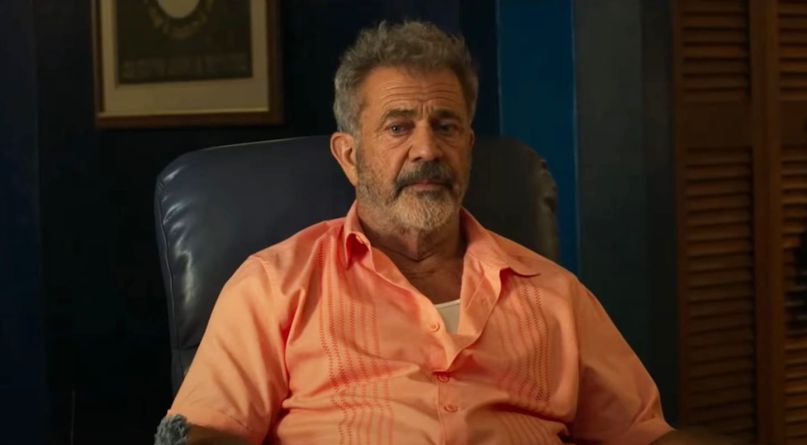 The Pitch: Wondering what Ken and Karen will be screening this holiday weekend? Look no further than Force of Nature, the storm/heist mashup that seemingly goes out of its way to be as offensive as possible. Written by Cory M. Miller and directed by Michael Polish, this derivative slog is set in San Juan, Puerto Rico during Hurricane Maria (yes, really) and stars Emile Hirsch and Mel Gibson as police officers. It’s hard to imagine a more tone deaf movie for the summer of 2020.

Gibson plays Ray, a retired officer refusing to leave his apartment in the path of the storm. Hirsch is Cardillo, the officer begrudgingly attempting to evacuate him along with fellow officer Jess (Stephanie Cayo). They are interrupted by a gang of criminals led by John the Baptist (David Zayas) on a mission to find nazi treasure somewhere within the flooding apartment building.

Wait a Second… If this plot sounds familiar to you, it’s because we’ve seen it before. Most notably in Die Hard, but there’s an on-the-nose reference to Lethal Weapon as well as ham-fisted nods to The Thomas Crown Affair, Hard Rain, and even last year’s Crawl. All of this would be great if it were executed well, but sadly, Force of Nature is painfully bad, smashing on to the screen with all the nuance of a … well, of a hurricane. And what’s more, it’s offensive, giving shelter to lazy stereotypes and deficit ideology. In a sense, it’s Threat Level Midnight if written by Stephen Miller.

More Try-Hard Than Die-Hard: Miller and Polish are clearly going for a “badass” look, but Force of Nature hardly achieves mediocre. When it makes sense, the plot is lazy, trafficking in tired cliches and not-so-clever dialogue. In his opening scene, “criminal mastermind” John strongarms a woman through an open bank in the middle of the day, warning her that if she resists, he’ll shoot her and the person next to her. The person next to her is his own henchman whom he shoots moments later for no apparent reason, then calmly walks out of the bank to make an abortion joke with his getaway driver.

The Bottom of the Casting Barrel: Immediately off-putting are the film’s two stars and the baggage they bring with them. Both Gibson and Hirsch have assault allegations in their past and Gibson’s bigoted comments are so widely known that his inclusion here is hard to see as anything other than dog-whistle meta casting. The fact that they are both playing cops feels like a slap in the face and a not so subtle nod to Blue Lives Matter. If there is any solace to be found, it’s that they both deserve to be in this awful movie. An example of what happens when your personal life is so problematic, the only roles you can land were seemingly written by Fox News interns.

Also problematic are the characters these men are playing. Ray refuses to leave, choosing his own selfish wishes in the name of “personal freedom” at the expense of the essential workers tasked with saving him. It’s a total echo of the defiant right-wingers who are currently refusing to wear masks during our global pandemic. Cardillo is no better. He clearly does not care about the people he has sworn to serve and protect, not even bothering to learn Spanish after transferring to the island. He’s only interested in assisting with the evacuation when he finds out there’s a fellow cop in danger and continuously shames Jess for doing her job. He becomes less and less sympathetic as more of his past is revealed in a shockingly offensive officer-related shooting.

Dog Whistle: The Movie: As if all of this weren’t bad enough, Force of Nature is one egregious dog whistle to racists and xenophobes looking for permission to blame non-white people for problems caused by systemic racism. The Latinx characters are presented either as a burden on the system or as using Hurricane Maria to take advantage of white people. Also gross is the running narrative of civilians making false claims and failing to show sufficient gratitude to police officers. You might think I’m reading way too much into this, but that’s how dog-whistles work. They hide in plain site, dismissed by those not embracing their racist ideology and seen as a boost of support to those who do.

Every non-white character in this movie is either incompetent, evil, or both. Jess is laughed at for wanting to do her job well, and the story she does get to tell about her service is openly mocked by Ray. Her character is little more than a damsel in distress, especially when compared to the white Troy (Ray’s daughter played by Kate Bosworth), who gets to be educated, strong, and capable.

The entire resolution also hinges on a Black man named Griffin (Will Catlett) hating cops so much that he trains a ridiculous pet to attack them. After foolishly falling victim to this mysterious animal, Griffin tells his own backstory of resisting arrest and being attacked by police. He laments that he didn’t deserve the resulting settlement money feeding the narrative that victims of police brutality were asking for it and don’t deserve justice. The movie hides behind naming racial profiling, and then makes an infuriating argument against defunding the police and the concept of reparations for slavery.

On top of everything, Force of Nature goes out of its way to humanize and soften an actual German nazi, whose protection of his art collection is seen as noble because it was given to him by his nazi father who stole it during World War II. The only way this movie could be more offensive is if the gang were trying to steal confederate monuments.

The Verdict: At best, Force of Nature is a cheap approximation of better movies. At worst, it’s a toxic blend of racist and misogynistic cliches that feel especially painful during this moment in time. The rain is kind of cool, but nothing you won’t occasionally find outside your own window. Save yourself from this disaster of a movie.

Where’s It Playing? If you’re willing to brave the storm, find it streaming on VOD.