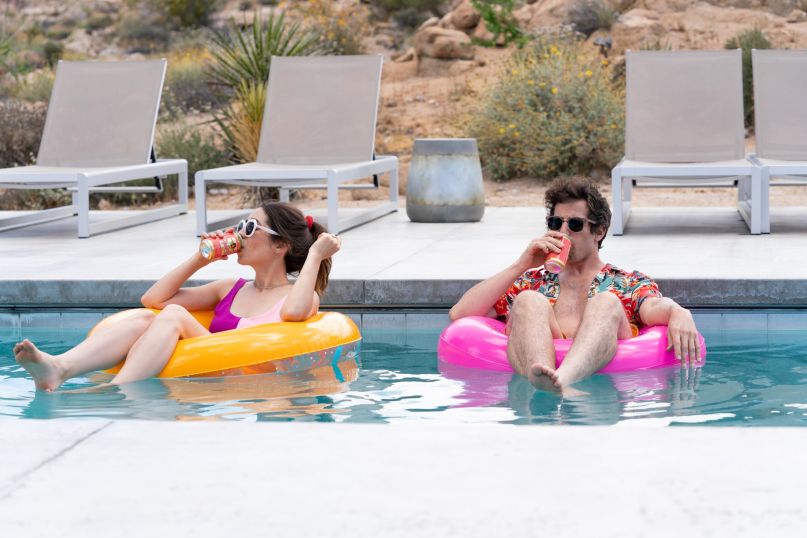 (A quick note: Palm Springs is a hoot, but its delightful twists work even better when you know as little about them going in. If you don’t want to be spoiled of even major conceptual plot details, read no further. Just trust that it’s a fun, high-concept Andy Samberg movie and see it when it comes out. Okay, on to the review.)

The Pitch: At first glance, Nyles (Andy Samberg) feels like the kind of slacker who coasts through life without a care in the world. We only see him in the context of his behavior at a destination wedding in Palm Springs, dragged there by his shallow, needy girlfriend (one of the bridesmaids): he sits through the ceremony drinking beer in a Hawaiian shirt and banana-yellow swim trunks, steals the mic for an awkwardly florid toast, and weaves through the dance floor like he knows how everyone’s going to move. “Today, yesterday, tomorrow — they’re all the same,” he drones lethargically.

But as Sarah (Christin Milioti), the cynical sister of the bride, soon discovers, Nyles’ nihilism is borne of a very real existential crisis: he’s stuck in a time loop, Groundhog Day-style, forced to live the same wedding day over and over again. And to make matters worse, she’s stuck in the loop now too. Together, they have to find a way to make the most of oblivion, to say nothing of finding a way out.

Last Resort: Lonely Island films are hilarious, off-the-wall, and often completely inspired, but one thing they struggle to be is accessible. From Hot Rod to Popstar, Samberg, Jorma Taccone and Akiva Schaffer’s comedic outfit frequently feels destined for cult obscurity, lovingly-crafted comic masterpieces appreciated by a loyal few. Miraculously (knock wood, everyone), Palm Springs is uniquely poised to break that streak, offering up a more mainstream-friendly comedy that nonetheless carries that bittersweet wink of the LI sensibility.

Out of the Loop: We’re all familiar with the Groundhog Day formula and its accompanying tropes, which have been wrung through every conceivable genre (Edge of Tomorrow for big-budget sci-fi action, the Happy Death Day movies for slashers). Luckily, screenwriter Andy Siara and director Max Barbakow know those tropes as well as anyone, and toys with them in intriguing ways while — get this! — actually mining some thematic gold from the concept itself. All the time-loop cliches are there: the fun montage where characters just enjoy the consequence-free nature of their situation, grinding away at obscure skills and subjects until they become experts, searching for the best way to get out of their imprisonment. Luckily, Siara and Barbakow keep explanations far away from the characters and the audience alike: all we know is that there’s a mysterious cave that fills with red light every night, and whether you fall asleep, walk into the light, or die, you always reset.

I Hate Weddings: But the uproarious possibilities the concept lends Palm Springs thankfully gives way to something more layered and bittersweet, a surprisingly heartfelt rom-com that manages to eke out assured performances from both Samberg and Milioti. Throwing two dissimilar people into a high-concept gauntlet to watch them come together is old hat, but Palm Springs uses the time-loop format to explore the anxieties that come from the prospect of long term relationships. It’s no surprise that they’re forced to relive a wedding day — the ultimate expression of committing to living through a person’s best and worst moments — which provides a lovely backdrop to explore the kind of repetitive doldrums that can test even the strongest dynamic. What do you do when you’re stuck with someone forever?

Samberg’s never had more to chew on here as a performer, modulating his shit-eating-grin jackassery into something more melancholy. He’s a petulant dork just like Jake Peralta or Connor4Real, but Samberg believably exposes the wounds Nyles has endured to get here, some which existed long before he was trapped in a time loop. At the same time, Milioti matches him beat for beat, and even steals more than a few scenes right out from under him. Between this and the Black Mirror episode “USS Callister”, she’s becoming a master of the ‘trapped in a high-concept sci-fi hell with a manchild’ genre, her Sarah magnetically switching between wide-eyed frustration and acerbic physical comedy. She and Samberg have killer chemistry, and it’s a credit to their performances that Palm Springs sells the “love conquers all” nature of its story.

The Verdict: Palm Springs made headlines at Sundance for breaking the previous record for the biggest acquisition in festival history by 69 cents (nice). But unlike previous big-budget bids for high-concept comedies like Amazon’s $13 and $14 million payouts for Late Night and Brittany Runs a Marathon last year, Palm Springs really does feel like Neon and Hulu will get their money’s worth — if they market it right. The most important thing is that it’s funny and charming in all the right ways, a slight but sweet meditation on the viability of long-term relationships.

Where’s It Playing? Jump into the time loop of Palm Springs on Friday, July 10th via Hulu. Don’t have Hulu? You can sign up now for a free 30-day trial!