The Beach House Brings Body Horror to a Pandemic: Review

Shudder's latest original will easily get under your skin 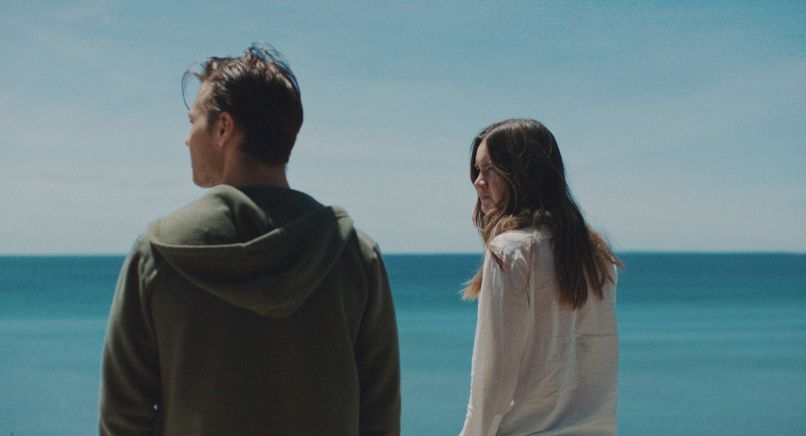 The Pitch: Terror surrounds two college sweethearts looking for a little R&R at their remote, family beach house. There’s something in the water, and for Emily (Liana Liberato) and Randall (Noah Le Gros), that something may spell their end.

Love That Lovecraft: Look, if you couldn’t tell from that semi-bullshit pitch, I’m trying to keep things vague for your sake. Don’t read up on The Beach House. Don’t watch the trailer for The Beach House. And, for Christ’s sake, don’t go Googling for photos of The Beach House. Like every great horror flick, the devil’s in the details, and those details are everywhere right now — mostly because this title is hot, hot, hot.

Ever since it dropped at Chattanooga’s digital film festival earlier this summer, horror hounds have been praising the sleek 90-minute movie. Odds are what brought you here were either promises on David Cronenberg’s body horror, John Carpenter’s lingering dread, or the space-y terror of H.P. Lovecraft. Well, rest assured, writer and director Jeffrey A. Brown knits all of those qualities into his film.

To his credit, though, Brown doesn’t just squeeze out his influences; he rubs that sunscreen in. Sure, flourishes of Cronenberg, Carpenter, and Lovecraft will have horror fans pulling a Rick Dalton in their living room, but they’re admittedly subdued. Brown is far more invested in wielding these hallmarks to propel his sense of dread, the likes of which will ultimately drown you by the end of The Beach House.

But that dread is paramount to the narrative. That dread speaks to the existential dilemmas Brown has bubbling beneath the surface of his horror movie. Because, without spoiling anything, what The Beach House seems to itch is the lingering notion that what we devote our life to, what we build our careers on, and what we do to survive ultimately consumes us whole. It’s a heady theme, but rather effective.

Of course, it also helps that we, too, are currently staving off a pandemic.

Let the Bodies Hit the (Ocean) Floor: Make no mistake, this is low budget horror — and the film’s sprawling, tranquil set pieces will key you into that reality (one of its downsides) — but it never looks low budget. This is a beautiful movie that earns its patience through Brown’s portraits that are all lensed to Instagram perfection by Owen Levelle. It’s a fitting marriage given that most of the film deals with environmental terror.

Much of that peripheral horror leads to the tangible, aforementioned body stuff — and that, too, is where The Beach House spares no expense. There are some truly icky moments in this film, and the effects and make up team — comprised of Elizabeth Borgatti, Peter Gerner, and Andrew Benepe — flex their muscles. Granted, the sequences are minimal and often spare, but they stick with you, which is all you can ask for.

The Colour Out of Shape: Lately, there’s been a big rise in cosmic horror, as if everyone read Lovecraft’s The Colour Out of Space one summer and said, “You know what, I could do that.” (Hell, Richard Stanley just went ahead and adapted the story.) The problem there is that cosmic horror so often affords easy out for storytellers — particularly, in the final act. All too often they toss in some spectral Star Gate sequence and call it a day.

The Beach House suffers this same fate, particularly in the film’s final minutes when it tends to huff and puff to the proverbial finish line. It’s a shame, too, because what was a claustrophobic survival tale akin to Philip Kaufman’s Invasion of the Body Snatchers pivots into a shambolic, psychedelic finale that’s just not as intriguing. On the plus side, it’s more or less a turbulent descent into a very poignant landing. So, there’s that.

The Verdict: The Beach House won’t be for everyone. Those coming in expecting a doozy of infections and balls-to-the-wall, gross-out horror will likely leave nursing a sunburn. But if you can appreciate those moments within what’s essentially a pandemic survival story, then you’ll walk away with a nice tan. Cheeky allusions aside, The Beach House is one of the most promising original films to hit Shudder, and you’d be wise to dive right in.

Sigh, just go with it.

Where’s It Playing? The Beach House opens its doors on Shudder on Thursday, July 9th.