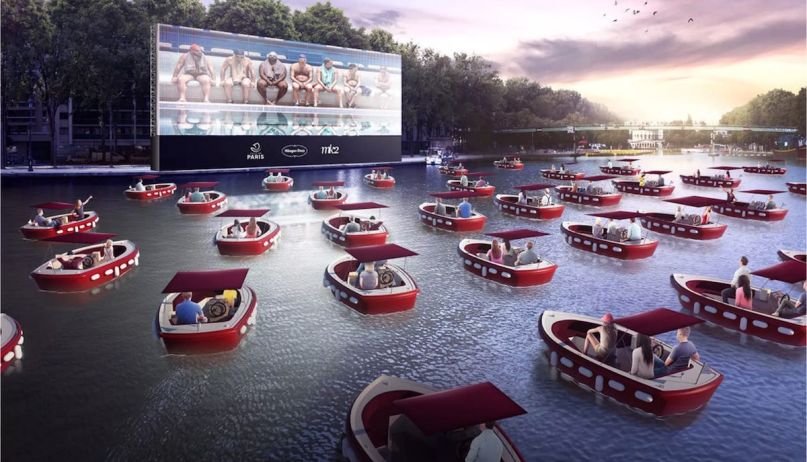 An artist’s rendering of the floating boat cinema (Beyond Cinema)

Parisians were treated to a floating movie theater adventure this past weekend. It apparently went swimmingly because now a different company, Beyond Cinema, is bringing a similar idea to America.

Starting this September, Beyond Cinema will launch 12 to 24 mini boats — each of which can hold upwards of eight people — in US cities. Movies will be projected on a large screen outdoors near the water, and patrons can pay to watch the film in comfort from one of the floating vessels.

The Australian entertainment and event company originally found success with their “boat-in” events back during pre-COVID times. Once the current pandemic set in, though, they decided to modify the event to uphold safety measures while still capitalizing on this creative way to keep movie lovers entertained.

On September 2nd, Beyond Cinema will host floating movie theaters in Los Angeles, Denver, San Diego, and San Francisco. On September 9th, those sanitized boats will relocate to St. Louis, Houston, Chicago, Miami, and Orlando. Then on September 16th, they will hold screenings in New York City, Pittsburgh, and Canadian cities like Vancouver, Toronto, and Calgary. The final string of US screenings will then conclude on September 23rd in Austin, Cleveland, Philadelphia, Columbus, and Cincinnati.

Many more details are still to come, including the exact locations of each screening and what films will be playing. However, you can pre-register via Beyond Cinema’s ticket website.

If Americans follow the rules at these floating movie theaters, then they could potentially become a short-term solution for our shuttered movie theater chains, especially those in California and New Jersey. Of course, none of this is possible without patrons, only one third of whom feel comfortable returning to traditional theaters in 2020. Maybe the other two thirds will feel better watching Jaws in a boat. If not, there’s always Walmart parking lots.