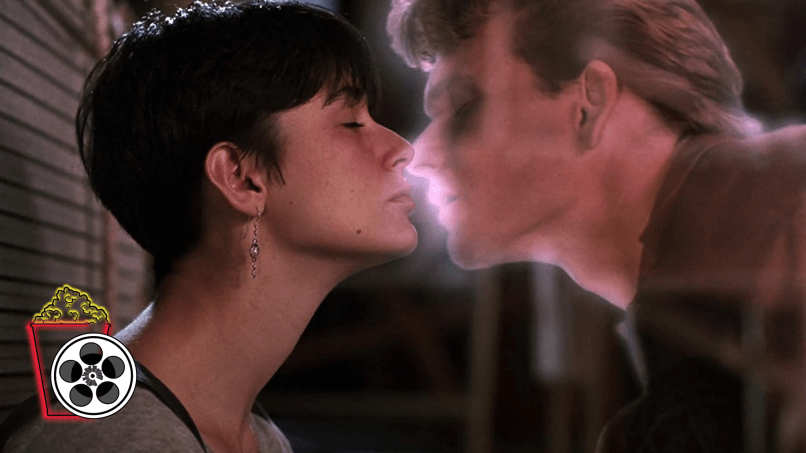 Blockbuster Month is celebrating the true titans of the genre. In the weeks ahead, you’ll read through a variety of features digging deep into the greatest hits of Hollywood, from popcorn classics to underrated gems. Today, Emmy Potter dials back the clock to 1990, when Jerry Zucker conquered the box office with the genre-defying blockbuster, Ghost.

A sweater knitted four sizes too big. Green underwear with a name written on them. A photo from Reno. The shirt he spilled margaritas on. To anyone else, this would just be a random list of things, but to Molly Jensen (Demi Moore), these are reminders of the love she shared with her recently murdered boyfriend Sam Wheat (Patrick Swayze). To a person mourning the death of someone they loved deeply, even a half-eaten pack of Rolaids suddenly carries a weight you’d never give it if the person you loved was still alive. For Sam, these items are proof it’s him trying to contact Molly from beyond the grave through shady psychic Oda Mae Brown (Whoopi Goldberg).

The plot of Ghost and the fate of its main characters hinges upon this stuff—mementos of a life and love left behind. How do we prove to others we love them or they’re in danger? How do we convince them someone or something is not what it seems? What evidence do we need to know we’re loved or that the people who love us never leave us? If that sounds like unusual territory for a summer blockbuster to you, you’re not wrong.

In terms of blockbusters, Ghost is something of an anomaly—not quite a horror movie or a weepy romance nor is it totally a Wall Street-style thriller, either. Instead, director Jerry Zucker and screenwriter Bruce Joel Rubin combined all three into one film with a kind of confidence that is both impressive and normally ill-advised. It’s as high-concept as any other easily recognizable blockbuster, but it doesn’t settle as neatly into a single, definable genre.

The title certainly suggests a horror movie, and the opening credits capitalize on that notion. The film begins by floating through an eerie, abandoned building as spooky atmospheric music — courtesy of legendary French composer Maurice Jarre — builds and builds. Suddenly, the music shifts into something more tender and romantic, and a sledgehammer breaks through a wall. This is the SoHo loft of artist Molly and banker Sam, and the film devotes its first 25 minutes to their relationship and the new life they are planning together. It’s pure romance and deeply sexy — thanks to the chemistry between Swayze and Moore (has pottery-making ever seemed more enticing?) — and the film effortlessly pulls it off. So much so that Sam’s expected death still feels like a literal shot to the chest, shifting the film from romance to horror. After all, what could be scarier than losing someone you love?

The truth is Ghost isn’t horror in the traditional sense. Instead, the film uses its supernatural horror elements more like action sequences. Because we know Sam is dead and no one can see him, moments that would usually feel scary in pure horror films—such as a keyboard typing by itself or a chair moving across a room—are simply evidence of his presence and reactions to the other characters. Sam can run through trains and walls to chase his killer, Willie Lopez (Rick Aviles). When he learns how to move objects by channeling his rage, he can fight ex-best friend Carl (Tony Goldwyn) even though he can’t use his fists. By removing the mystery of the identity of the supernatural forces in the film, it also eliminates the actual horror and replaces it with empathy. And it turns Sam into a much more active character, rather than simply a dead guy with a grudge who can’t physically touch anyone, including the girlfriend he’s still trying to protect. And Swayze passionately throws himself into it—sometimes literally—through every frame of his performance. It’s one of his best.

Initially, however, Zucker did not want Swayze in his movie. The director once said, “Over my dead body will Road House Patrick Swayze ever play this role.” In his biography, Time of My Life, Swayze put it this way: “Jerry had just seen the kickboxing, long-haired, tough-guy Patrick and couldn’t imagine me in the role of a sensitive boyfriend who gets murdered and comes back as a ghost.” He wasn’t entirely wrong. At that point, Swayze had mostly made a name for himself playing tough guys in fare like 1983’s The Outsiders, 1984’s Red Dawn, 1987’s Dirty Dancing, and the aforementioned 1989 classic Road House—all films that capitalized upon Swayze’s dance and martial arts background more than his acting ability.

But in fairness, Zucker isn’t exactly the guy you’d expect to direct a drama, either, let alone one as deeply sentimental and romantic as Ghost. Let’s not forget, he makes up one-third of the Kentucky Fried comedy trio Zucker-Abrahams-Zucker, the guys responsible for slapstick hits like 1980’s Airplane! and The Naked Gun franchise. Comedy is a serious art form, but it’s notoriously difficult for Hollywood to see comedic actors and directors as being capable of anything outside that box. Which is why it’s hilarious Zucker—making his own solo directing debut—couldn’t initially see outside the box he’d put Swayze in nor could he see Goldberg as anything other than a stand-up comedian, despite her own burgeoning film career in the mid to late ’80s.

Swayze wanted the role badly. Though he’d been getting tons of scripts, none had really appealed to him until his wife, Lisa Niemi, suggested he read Rubin’s script for Ghost, which had him weeping by its end. When he finally managed to get in the audition room, he told Zucker and the casting directors he’d read the whole script for them. They put him through his paces, and when he finished, the whole room was crying. Zucker was convinced. Sure enough, Swayze also managed to convince Zucker to reconsider Goldberg for the part of Oda Mae Brown. The two flew to Alabama where she was shooting another film, and the chemistry between her and Swayze was electric. He told Zucker, “I’m not doing it unless she does.” Then, of course, Goldberg won an Oscar for it by proving not only her comedic chops, but revealing a deep tenderness (especially in the scene towards the end when she lets Sam possess her in order for him to touch Molly one more time).

It’s sort of a miracle Ghost came together at all given its many disparate elements — from its stars and director to its special effects and Academy Award-winning, genre-defying script. There is no neat elevator pitch for Ghost; it’s unlike anything Hollywood traditionally rolls out. But that also happens to be the film’s biggest strength and why audiences connected so strongly with it in 1990, to the tune of $505 million dollars, making it that year’s No. 1 blockbuster. It’s a film about universal, big ideas told through intimate relationships that manages to be thrilling, romantic, and sometimes also really funny. In that sense, Ghost is both of its time and also timeless.

Today, Ghost hits a little differently, particularly in an era when we can’t touch the people we love, when many of us have lost loved ones, and when institutional corruption and greed run rampant. New York City, the film’s setting, has itself been a kind of ghost town for months as we all, like Sam, have been confined to certain temporal and spatial areas that leave us separated from others. Make no mistake, Ghost is first and foremost a film about grief—the kind that leaves us immobilized, exhausted, and desperately wishing for everything to make sense again. And right now, all of us are going through grief in its various stages, mourning people and things we’ve lost—hungering for them like in the Righteous Brothers’ song that plays throughout the film.

Ultimately, though, what makes Ghost so satisfying to watch and revisit is the reminder that we’re not alone. Love is always present, even when we can’t physically feel it, or see a coin drag up the wall for evidence. As we learn through the tragedy of Molly and Sam, grief brings people together in strange—some would even say, supernatural—ways. But, more importantly, it affords us the opportunity to re-mold our own existence—to make something new out of our collective grief. It won’t be easy, but you do what you can to get through the next day, and the next, until one day you see the light again. As Sam says at the end, “It’s amazing, Molly, the love inside. You take it with you.” If you still need evidence of Ghost’s ensuing impact, the tears running down your face by the end should suffice.