Heavy in Hi-Fi: Why Fidelity Matters for Modern Metal 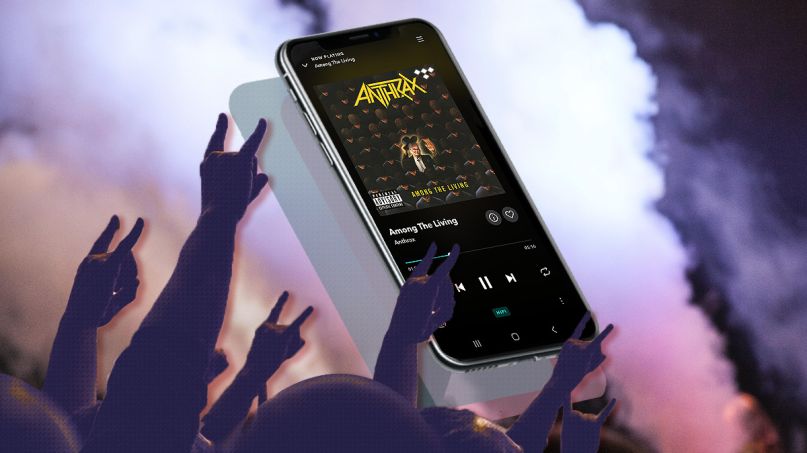 When heavy metal started to take off in the ’80s, its heyday was driven by MTV, radio, and the sale of vinyl and cassette tapes. The compact disc would later emerge to overtake other analog formats, but for the most part, fans would purchase the latest Slayer, Megadeth, or Ozzy Osbourne album at a record store, unwrap the shrink, and play their new possession on a boombox or sound system.

In the digital age, the glorious effect of this consumer reconciliation has become lost, in part because of the fidelity in which many consume and stream music. We’re not hearing the recording as it happened, but a filtered, cellular-data efficient version of what was once an uncompressed, lossless audio file or analog tape, full of frequencies that never make it through MP3 compression. For metal — a sonically intense, loud, and dynamic genre — compression shackles the sound. The cymbals wash out, the bass disappears, the bitrates are crushed. Fortunately for heavy metal audiophiles, TIDAL offers streaming uncompressed, hi-fi audio that preserves the original recording quality.


“It’s important to me that the music sounds exactly the way it was recorded,” Anthrax drummer Charlie Benante tells Heavy Consequence, “because we put a lot of time and attention into making the best-sounding record that we can. Of course, everybody does that too, but the problem is that nowadays, artists are spending so much time on a sound or a tone, and then when the music gets released, and people are hearing it on these little ear pieces, it’s not the kind of experience that we’d like everyone to have. We would like everyone to experience the musical landscape that we tried to paint.”

Heavy metal emerged during a golden era for home theater hi-fi. People decked out their living rooms with expensive, powerful gear. Imagine picking up Anthrax’s Among the Living on the day it was released, cranking the stereo, and headbanging in front of your mirror in 1987? The walls are shaking; you’re crushing beer after beer. You’re hearing “I Am the Law” for the first time. It’s incredible. The recording is warm and palpable — analog.

This is unfortunately not a frequent reality in the era of Airpods, as Benante alluded. You can still own a hi-fi system and obtain albums on vinyl, but for many, this is an expensive endeavor that’s closer to hobbyism than mass consumer media, as it was in the heyday of vinyl. Certain sites have turned vinyl into an investment culture, and much of it defies its analog intent, sourced and cut from digital or unnamed sources, functioning more as collectibles than audiophile listening experiences.

But there’s finally a way to stream and overcome the general apathy toward sonic fidelity in 2020, once again conjuring the glory days of lossless purity and the full breadth of sonic might. Before TIDAL, which offers streaming lossless 24-bit audio to premium subscribers, hardcore audiophiles persevered in the digital age, albeit in a legal gray area. Long defunct torrent sites required users consent to terms stating they already owned anything downloaded, with the files acting merely as a backup. Obviously, this didn’t stand, as those sites were eventually closed by law enforcement. In the years to follow, digital audiophiles were left with convoluted promises of Neil Young’s Pono service and time-consuming CD rips.

Most modern recordings are tracked digitally or to tape — mostly the former at 24-bit, 96kHz or greater. Less bits, less sonic information, as Young himself would grieve over with his 1992 album Harvest Moon, which was apparently tracked in 16-bit (CD quality) rather than 24-bit, “the depth of emotion in the music forever lost in the process.” MP3 compression takes it a step further, reducing otherwise massive audio files to small file sizes that are easily downloadable and streamable, at the expense of audio quality.

“I guess the worst thing for me is when your music is compressed and reduced to a small file,” Benante says. “To me, it then has this tone that’s very tinny, I just don’t like the way it sounds. A number of years ago, when iPods and devices like that were first coming out and MP3s were being used, the music was being shrunk down in order to fit on a hard drive and that meant that the sound quality was being diminished as well.”

In layman’s terms, when a song is compressed, we’re only hearing part of what actually happened. Think of it as a river that’s been dammed up. Only part of the stream gets through, diverted to smaller tributaries for efficiency and access (more streams, less data). It’s a wicked trade off, data vs. sound quality. Heavy metal suffers particularly from the binding vice of digital compression. Who can’t attest to hearing a crappy MP3 version of Pantera’s “Walk” on a burned CD in your high school friend’s car, where the cymbals are all swishy-swashy and the vocals sound like paper tearing?

Metal fans deserve better. It’s 2020, and now you can listen to Pantera’s “Walk” and hear damn near everything — better than CD quality — as if you’ve obtained the master tapes themselves. TIDAL’s partnership with MQA (Master Quality Authenticated) compression allows for the highest quality available in streaming, in glorious 24-bit, approved as true lossless by the artist’s themselves. While other streaming services compress the file and then allow it to be streamed, MQA takes a reverse approach — compressed files are downloaded by the user and then uncompressed in real-time when accessed via the TIDAL app, rendering the original master-quality audio. Available via TIDAL’s Hi-Fi subscription, which comes in at $19.99 a month — the cost of one LP. It’s well worth it for audiophiles. If TIDAL doesn’t have a “Master” version of an album — its currently working with label partners and distributors to secure more MQA audio — it also touts millions of CD quality (16-bit) files, which is more than can be said for most rival streaming services.

It all comes down to bitrate. By comparison, TIDAL offers lossless audio encoded with the FLAC codec: 16bit x 44.1Khz x two stereo channels means 1411 kilobits per second — 4.4 times the bitrate of the next best thing, TIDAL’s “High” quality AAC at 320kbps (the equivalent of the 320kbps “high quality” setting on most rival streaming services). TIDAL then goes a step further with TIDAL Masters — billed as “the highest quality audio available in streaming” — which uses the aforementioned MQA compression process to make 24-bit master file streamable. The MQA file is decompressed — or “unfolded” — in two steps, first via the TIDAL app and then with MQA capable hardware completing the unfold. This allows for playback of master tracks at a bit-depth of 24-bit, with sample rates ranging from 44.1kHz all the way up to 352kHz, higher than any other streaming service. Even if you don’t have MQA capable gear, TIDAL Masters’ single unfold via the app will still render better-than-CD quality. So far, TIDAL has a library of over 60 million tracks streaming in FLAC, and a continuously growing collection of Masters.

“So, to me, lossless audio retains the purist audio value of that piece of music,” Benante continues. “The file size, of course, is higher because you’re not shrinking it down that much, you’re keeping it as pure to the sound that you originally made. So, if I’m going to do anything, I’m going to do it that way, at a higher bit rate because I want to hear the music the way it was intended to be heard. I know that some streaming sites are streaming at a higher level which is great.”

Experimental rock act Puscifer, who just unveiled a new single, “Apocalyptical”, have albums on Tidal in lossless format. Mat Mitchell, one of the core members of Puscifer along with Maynard James Keenan (Tool) and Carina Round, tells us, “There’s a clarity and depth that gets clouded when fidelity is compromised. Lossless sounds more open, clear, and less fatiguing to the listener.”

Mitchell adds, “Imagine a window, dirty or clean you can still see thru it, but everything is more crisp and vibrant when the glass is clean. For me lossless audio feels the same way.”

Modern speakers and headphones have become economical enough that massive hi-fi stereos are no longer necessary to reap the rewards of lossless audio. TIDAL states that only “a phone or computer and headphones” are needed to experience its Hi-Fi benefits. For those who do have formidable hi-fi gear, the service has been integrated into many home audio devices, from top-of-the-line equipment to prevalent network casters such as Apple Airplay and Google Chromecast. Or, if you’re old school, you can download TIDAL Masters straight to your phone for offline listening, plug it into a quarter-inch AUX cable, and pretend you have a walkman loaded with the highest quality digital audio accessible on the consumer market. Even on Airpods, when you go from the junk MP3 of “Walk” you ripped back in 2006 from your friend’s CD-R to the Master file on TIDAL, you’ll know the difference. First of all, you’ll hear Rex Brown’s fiery bass work (bassists always take the biggest hit from MP3 compression, as the sub low-end is often carved out). Then you’ll realize that metal was meant to be heard loud, unimpeded, and as true-to-life as possible.

“To me, listening to music is like looking at a piece of art,” adds Benante, who recently prepped a remastered 30th anniversary edition of Anthrax’s Persistence of Time for release this summer. “If you see a photo of a painting in a magazine, you think, ‘OK, yeah, that’s nice,’ but if you go and see that piece of art in a museum or an art gallery, the way the artist intended for it to be viewed, it’s an entirely different experience.”

TIDAL is the closest thing we have to that audio museum concept. Sound quality isn’t just about subscription plans, it’s about hearing what actually went down in the studio. It’s about hearing the creak of the fingers on the fretboard, the full gutturals of the scream. It’s about preserving the absolute closest representation of what the artists heard when they actually made the recordings. Fortunately, there’s a finally a streaming platform for those who want to hear.