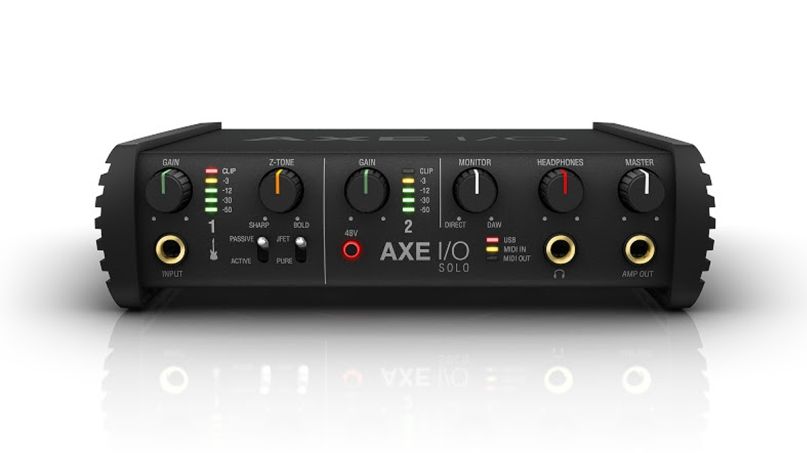 IK Multimedia has rolled out a pair of products that will appeal to guitarists looking to cut new tracks in their home studio. The AXE I/O SOLO allows you to interface your electric guitar with your computer or recording device, and the T-RackS Space Delay plug-in offers new production effects.

The latest in IK’s AXE I/O line, the SOLO is true to its name — perfect for plugging in your guitar and getting results fast. It can power and ampilfy both a line or XLR input via IK’s Class A PURE mic preamp. In layman’s terms, it means you can use it as a pre-amp for guitars and other instruments, as well as XLR microphones.

But as a guitarists’ tool, the SOLO excels, providing what IK calls “tone shaping.” This allows for a single instrument to emit a wide range of tones, which can be dialed in according to the demands of the mix. Whether you need shrieking guitar solos or low-end rhythmic chug, just turn the Z-TONE knob.

Inside the SOLO is a PURE circuit, for the holographic clarity, and a JFET circuit for added “warmth and harmonics.” Lastly, IK’s proprietary Z-TONE impedance-adapting circuit offers adjustment to the input impedance, interacting the guitar’s pickups. Turn up the impedance for a sharper, precise sound, and go lower for thicker tones. The SOLO also features two dedicated inputs for controller pedals and switches, MIDI in/out, and is bundled with the AmpliTube 4 Deluxe software.

Once you’ve laid down some tracks through the SOLO interface, you can then hit them with the tape-drenched effect of the new T-RackS Space Delay plug-in.

Available as a standalone plug-in or inside IK’s T-RackS 5 mixing/mastering software, the Space Delay emulates vintage tape echo for a convincing sonic treatment. The key is the source: Roland’s RE-201 Space Echo delay unit, which is modeled by IK’s plug-in to “an unprecedented level of detail,” according to the company’s press release. More specs are available via IK’s website.

The AXE I/O SOLO retails for $249.99 and the Space Delay plug-in goes for $99.99. Both can be purchased via IK’s online store, while you can pick up other IK Multimedia products here. Watch Testament guitarist Alex Skolnick’s testimony on AXE I/O interfaces below.