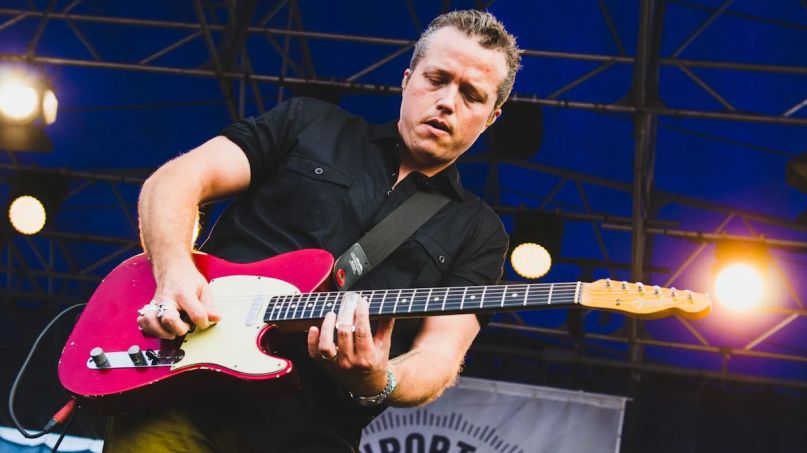 Jason Isbell contributed one perfect song to the 2018 A Star is Born soundtrack: “Maybe It’s Time”, sung by Bradley Cooper. Now, Isbell has shared his original demo of “Maybe It’s Time”, as well as the unreleased track “Alabama Sky”. Both songs are available on Bandcamp as part of the last fee-free Bandcamp Day.

Bradley Cooper’s performance as alcoholic rock star Jackson Maine earned him an Oscar nomination. “Maybe It’s Time” was the character’s signature song, and Cooper’s singing was surprisingly good. But Isbell remains the better vocalist. The lyrics come out crisper, easier to hear, yet Isbell’s tone sounds much more conversational. Compared to the film, the demo is driven by a louder, brighter acoustic guitar, and Isbell’s delivery is so subtly emotional, it makes a well-known cut sound fresh again.

In an interview with Stereogum, Isbell explained how the song nearly didn’t get into the film. He had recently completed his magnificent 2017 album The Nashville Sound, and when he heard about A Star Is Born, he thought, “My brain is exhausted and I don’t feel like messing with that right now.” His wife Amanda Shires changed his mind. According to Isbell,

“Luckily my wife said, “Maybe you should reconsider this, because I think you have some old songs that could work on and bring in that would be pretty perfect for this, and I think they’re kind of counting on you for it, and if they’re counting on you for it, that means they’re going to treat you pretty well.” Well, OK, maybe so. Maybe my participation in this wouldn’t be tertiary, it’d be something that’d actually be important to these people. So I went through my songs, and found “Maybe It’s Time.” I had already started working on the song and I moved some things around a bit, brought it in and sang it to Dave [Cobb] and he was just floored. “Oh this is perfect! This is perfect!” The whole time I’m thinking, “Yeah, it’s perfect but they’re gonna make me change most of it.” Because that’s how they always do. But they didn’t. They didn’t change a thing.”

Check out the demo for “Maybe It’s Time”, and compare it to the original below. The song is backed with the unreleased track “Alabama Sky” which you have to purchase to stream. Today, July 3rd, Bandcamp is waving its fees for the last time this year, and all proceeds go straight to the artists.

Earlier this year, Jason Isbell and the 400 Unit released Reunions, one of our favorite albums of 2020 so far. In June, he promoted the record on Colbert with a quarantine rendition of “Running with Our Eyes Closed”. He also participated in a John Prine tribute concert. Next year, Isbell is teaming up with Lucinda Williams for a 2021 tour.