AMC, Regal, and Cinemark call their inability to operate "unconstitutional" and a First Amendment violation 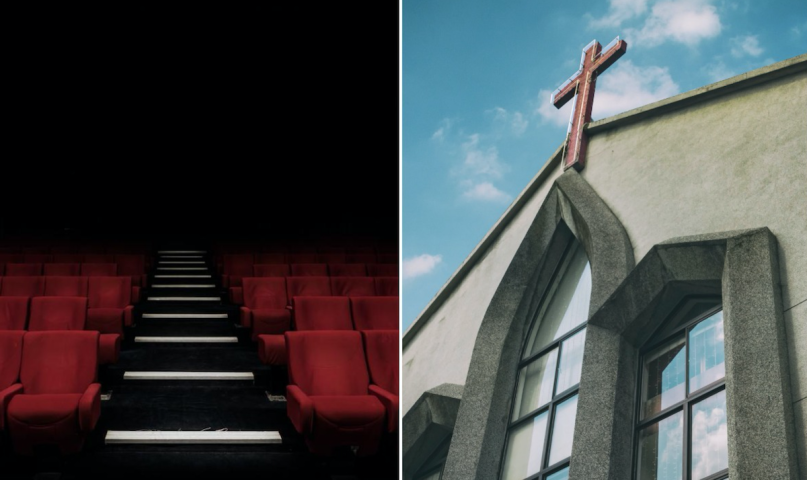 Satire is dead and reality continues to dance atop its grave. Movie theaters, where folks can check out the latest Adam Sandler film, are now equating their value in society to that of churches, sacred spiritual spaces where people gather to worship. The unusual comparison is being made as reopening guidelines are allowing for churches, but not theaters to resume operations.

As of July 6th, AMC, Regal, Cinemark, and other theater giants are suing the state of New Jersey for not being able to open for business due to COVID-19 restrictions. According to the legal complaint led by the National Association of Theatre Owners of New Jersey, their continued closure while churches and malls are allowed to operate is an “unconstitutional and unlawful” distinction.

“COVID-19 represents a serious public health risk, and Plaintiffs support fair and reasonable actions by the government to address that risk,” reads the complaint, first published in the Hollywood Reporter. “However, the government-mandated total closure of movie theatres is neither fair nor reasonable, and is instead a violation of Plaintiffs’ First Amendment rights of freedom of speech and freedom of expression, Equal Protection of the laws, Due Process under the law, and is a Taking of property without just compensation.”

The suit is being handled by the bigwig attorneys at Davis Wright Tremaine, a law firm that specializes in First Amendment rights violations. In the past, they’ve represented media outlets like CNN, The New York Times, and BuzzFeed News, whom they defended for their publication of the 2017 Trump dossier. However, invoking “freedom of speech” in relation to corporate movie theaters not being able to charge people to consume entertainment in closed quarters during a global pandemic seems like a very liberal interpretation of the concept.

Here’s the complaint’s reasoning for why free speech is relevant and why movie houses can be likened to churches:

“Defendants have a legal obligation to promulgate orders that treat like entities in a like manner, and not to create arbitrary or irrational distinctions, particularly where First Amendment rights are at stake. Although Defendants have issued orders allowing other public assemblies such as religious services and ceremonies to open, they have withheld approval for movie theatres, which are similarly situated, if not less of a risk, from a public health perspective. Representatives of Plaintiffs met with representatives of Defendants, and the representatives of Plaintiffs shared detailed safety protocols that would be implemented for the reopening of movie theatres in the State that Plaintiffs are ready, willing, and able to implement.”

One of the main impetuses of the lawsuit is that NJ Gov. Phil Murphy hasn’t provided the state with a proposed timeline for entering Stage 3, which would permit the reopening of movie theaters, gyms, indoor amusement parks, and performing arts centers. The state moved into Stage 2 on June 15th, allowing for the relaunching of indoor shopping areas.

However, Gov. Murphy’s hesitation to move into a new stage is understandable. States that have reopened their public spaces —  such as Florida, Texas, California, and Arizona — have seen record-high case numbers in recent weeks, and with no vaccine on the horizon, there’s no reason to believe that coronavirus will suddenly disappear in the coming weeks or months.

That’s obviously not good news for the movie theater industry, which like the film industry as a whole, has been absolutely decimated by the COVID-19 pandemic. However, there have been some troubling signs that these theaters may not have the safety of their staff and patrons in mind. Last month, back when it appeared that theaters would be back in business in July, AMC Theatres announced that they wouldn’t be requiring masks upon reopening in order to avoid “political controversy.” They quickly reversed that stance amidst public backlash, but their hand had been revealed.