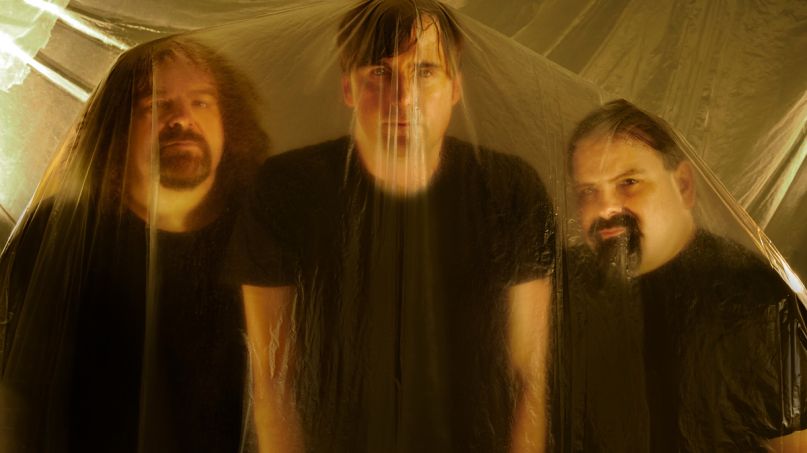 UK grindcore vets Napalm Death have announced a new album, Throes of Joy in the Jaws of Defeatism, which will arrive on September 18th. Although the band has yet to unveil a single (it’s coming July 24th), they did share the tracklist and gruesome cover artwork.

The cover art is par for the course for Napalm Death, who’ve proliferated provocative and shocking imagery throughout their long-running career, usually with a political or philosophical purpose behind the gore. Frontman Barney Greenway brings much of that aesthetic to the band via his lyrics. For the new album, he draws on the current state of the world.

“The phrase sticking in my mind when I started thinking about the lyrical direction for this album was ‘the other,’” Greenway says in a press release. “You could recognize at the time that there was a rapidly growing fear and paranoia being generated about everybody, from migrating people to people with fluid sexuality and this was starting to manifest itself in very antagonistic reactions that you felt were almost verging on violence. Not everybody resorts to such reactions of course, but even the basic lack of understanding can become toxic over time. I’m not saying that this is an entirely new phenomenon, but it has been stoked in recent history by some particularly attack-minded people in more political circles and, as ever, I felt that it would be the natural antidote to endorse basic humanity and solidarity with all.”

On Frode Sylthe’s somewhat triggering album artwork, Greenway offers some context: “The artwork specifically uses a white dove as a centerpiece, which of course is a commonly recognized symbol of peace and cooperation. The dove has been mauled very violently by a sterilizing hand and in death appears particularly broken and bloodied. However, through the violence you can see an equality symbol in blood on the chest of the dove, which perhaps demonstrates — visually at least — that equality cuts through in the end. A positive amidst many negatives then, much like the album title itself being a bit of an oxymoron — the celebration of humanity even in the mangling jaws of negativity.”

Once again, Napalm Death turn otherwise jarring imagery into a symbolic force for good. For decades, the band — especially since Greenway joined in 1989 — have provoked that sense of “joy through brutality” in the concert setting, as we can attest to catching them last fall in New York.

The LP, which is being produced by the band’s longtime collaborator Russ Russell, will follow the tide-over 7-inch single that Napalm Death released back in January.

Pre-orders for Throes of Joy in the Jaws of Defeatism will be available via Century Media Records around the release of the first single on July 24th, according to the press release. Check out the artwork and tracklist below.

Throes of Joy in the Jaws of Defeatism Artwork: