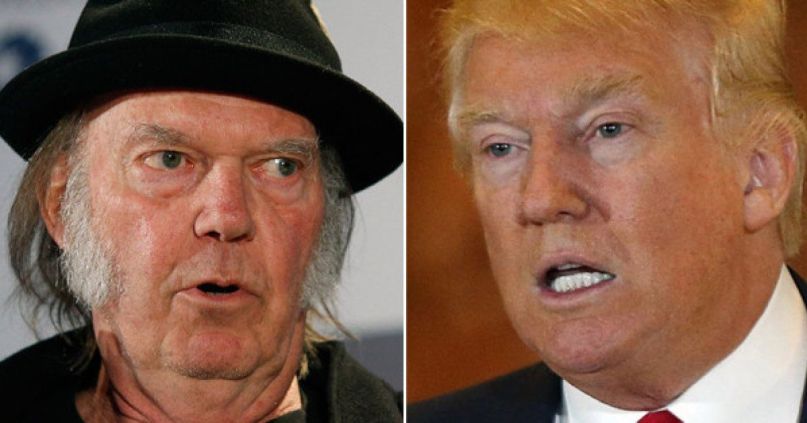 Young previously said he would not sue Trump over concerns of “potentially distracting from your important work at hand protecting and saving American lives” amid the COVID-19 pandemic. However, after seeing Trump order “thugs in uniform” into American streets, Young apparently has had a change of heart.

“He order this himself. This is all DJT. He told them to wear camouflage, use unmarked vehicles to take people away, innocent people peacefully protesting — their constitutional rights as US citizens,” Young wrote in a statement posted to Neil Young Archives.

“Trump has no respect for our military,” Young continued. “They are not to be used on the streets of America against law abiding citizens for a Political charade orchestrated by a challenged President. It’s a complete disgrace, the way he plays citizens against one another for his own political gain, saying that only cities run by democrats are in trouble and need help. Those elected leaders asked him not to intervene. The elected representatives in all these cities and states are against Trump’s military thugs shooting people on the streets. Our military is against it. That is not their sacred mission.”

Young then noted the irony of the federal government’s response to COVID-19 in comparison. “When the states asked for help with COVID-19, the president did not give it. He said he’s not responsible. When they said don’t bring military to our streets — we don’t need that, he did it anyway for his own political reasons — not for America. This rogue president is creating a much worse problem with his street thug army of uniformed hatred.”

As such, Young concluded, “I am reconsidering” legal against against Trump. “Imagine what it feels like to hear ‘Rockin’ in the Free World’ after this President speaks, like it is his theme song. I did not write it for that.”

Perhaps Young can join forces with fellow rock legends The Rolling Stones, who are also threatening Trump with a lawsuit over the continued unauthorized use of the band’s music. Thus far, Trump has been managed to avoid legal consequence by hiding behind a Political Entities License that provides his campaign access to more than 15 million musical works in BMI’s repertoire. However, The Stones recently found a loophole that allows them to exclude their music from the license, and is using that provision as the basis for their lawsuit.

As a new US Citizen, Young will also be able to take out his anger towards Trump at the ballot box. Reminder: Election Day is just 99 days away!